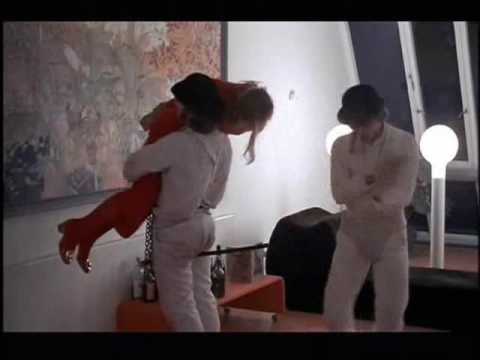 With the conventional wisdom congealing around Ta-Nehisi Coates’ belief that “mass incarceration” in America was both racist and unnecessary — just look at how low imprisonment rates are in Europe! — it’s worth noticing something that almost nobody in America has noticed: the big property and assault crime wave in Britain in the last part of the 20th Century. That would also seem relevant to the current massive push by the President and the metropolitan media that something must be done about those well-armed rednecks out in the sticks.

You can get clues about the criminal history of Britain from books and movies. For example, when Anthony Burgess published his sci-fi novel A Clockwork Orange in 1962, in which Alex and his droogs motor out into the countryside to commit home invasion on an isolated cottage, the crime of home invasion barely existed in England. Burgess based the incident on something that happened to his wife’s family during WWII at the hands of U.S. GIs. (There’s a lot of social history that’s been swept under the rug about life in England before D-Day as the country filled up with young Americans waiting around to fight the Germans.)

Yet, by 1990 or so, home invasions in the rural countryside were a sizable problem, seemingly much bigger than in the U.S., where homeboys mostly terrorize their own communities.

And then there was the fecklessness of the British police.

There’s a scene in the fine little 2004 British movie Millions directed by Danny Boyle (his latest film is the new Steve Jobs biopic out this weekend). Unfortunately, I can’t find video of the scene online. A family moves into a new exurban housing development in the English countryside. At a gathering of the new homeowners, a policeman addresses them:

I’m your… Community Policeman. Obviously there is no community here as yet, not to speak of, but you know…

Anyway the first thing to say is, these new houses and Christmas coming up. Statistically, you’re going to get burgled. Now, not all of you, but some of you, soon. Probably this week, next.

When you are, call me.

My recollection is that a homeowner interjects at this point to ask if the policeman will arrest the thieves or merely use the information to prevent future crimes. The cop responds to the effect of: Neither:

I’ll give you a crime number and then you can make a claim on your insurance.

From an interview with Boyle in About Entertainment:

Q.: This is a weird question, but in “Millions” the police come and warn the community about the fact they will probably be burglarized during the holidays. Is that realistic?

Boyle: (Laughing) Yes. It?’s silly but there?’s an element of truth in it. Britain is plagued by burglaries at the moment. Everybody is paranoid about it. It?s kind of making fun about it, how it’?s inevitable you?re going to get burgled. And it is if you live in a city. It’?s inevitable you’?ll get burgled. In fact, I live on my own and while I?’m here in America, I?’m pretty convinced I’?ll be burgled by the time I get back.

Q. The scene plays a little strangely to American audiences. The police here don?’t usually come around and tell us to prepare to get burglarized.

Boyle: It’?s maybe very idiosyncratically British, a guy coming around saying that. That gets a big laugh in Britain. People really recognize that copper with that kind of fatalistic approach to crime.

Since the 1990s or so, the British government has been trying to fight back against crime. As Burgess predicted in 1962, they’ve taken a largely technocratic approach. For example, Britain now has a huge number of security cameras.

There is probably a lot we could learn about the British experience of crime. Being dependent as we are, though, in getting our views on crime from Ta-Nehisi Coates, who is, for all his virtues, not the world’s most worldly man, we’re probably not going to be hearing much about it. Maybe if Obama were to appoint Ta-Nehisi Coates as America’s Ambassador to the Court of St. James, Coates could find out about it and tell us.