The War on Christmas as Part of the War on Everything: Hundreds of Congolese in London Brutally Beat White Christmas Carolers, Others, and Each Other

Via Larry Auster, we have this so-called demonstration.

The official story is that masked, violent, black African thugs attacked white Christmas carolers, smashed car and shop windows, tried to set a huge Christmas tree on fire that was the annual gift from the city of Oslo, and eventually started to attack each other, as a planned "static protest" of the election results in their country. Static, indeed.

It sounds as though the bobbies only stepped in, when they saw blacks getting harmed.

…a group of 200 Congo demonstrators forced the evacuation of Oxford Circus tube station, central London, after they set off a passenger alarm on an underground train.

What does brutalizing Englishmen and destroying English property have to do with protesting Congolese electoral results? This is what they do; any 'ol excuse will do. Once they get done butchering whites, they butcher each other, just like back at home.

The rioters are charging Western governments with "propping up" the present regime. Of course, it's all whitey's fault. And whatever the blacks do that isn't the fault of contemporary Western governments is caused by "the legacy of colonialism," in this case, the Belgians, bloody Leopold, et al.

For black Africans, the war of all against all, in which life is "nasty, brutish, and short," is the norm, which they seek to impose wherever they go.

Whatsoever therefore is consequent to a time of war, where every man is enemy to every man, the same consequent to the time wherein men live without other security than what their own strength and their own invention shall furnish them withal. In such condition there is no place for industry, because the fruit thereof is uncertain: and consequently no culture of the earth; no navigation, nor use of the commodities that may be imported by sea; no commodious building; no instruments of moving and removing such things as require much force; no knowledge of the face of the earth; no account of time; no arts; no letters; no society; and which is worst of all, continual fear, and danger of violent death; and the life of man, solitary, poor, nasty, brutish, and short.

The only limitation to Hobbes' dictum is that for black Africans, in the state of nature the life of man is collective, rather than solitary.

I have to disagree with Larry Auster in his big judgment on England's destruction: This is not suicide, but democide. The English ruling class has destroyed Albion by waging relentless, generations-long war on the white working class, and on patriots of all classes. The Congolese rioters are not attacking the British state; they are—unwitting, to be sure—agents of the British state against the British people.

I'll end with some good news: The Telegraph has so far permitted a great many pro-British, pro-white comments, who have routed the racist communist/anarchist "antifas." I wonder if the energized pro-British commenters and the censors' tolerance towards them are reactions to the political imprisoning of Emma West.

Carol singers raising money for a cancer charity in Trafalgar Square were attacked by protesters during a night of disorder that saw 139 arrests. 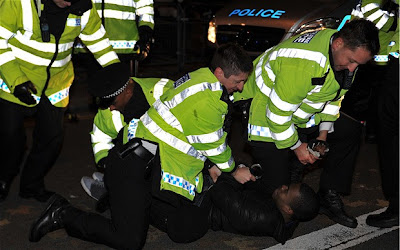 A demonstrator is arrested during the protests Photo: DEMOTIX

Shops were attacked, passers-by threatened and car windows smashed during a demonstration in central London against the election result in the Democratic Republic of Congo.

The carol concert was raising money for MacMillan Cancer Support. It was organised by a group of friends whose loved ones had been treated for cancer.

Masked teenage boys 'stormed' the singers, throwing bottles of water and hot drinks into the crowd. A woman in her 40s, said to be undergoing treatment for breast cancer, was pulled to the ground. A youth attempted to set light to the Christmas tree, an annual gift from the city of Oslo since 1947, one witness said.

"They were determined not to let us sing and have fun and utterly ruined the atmosphere. Have your protest and make your point, but why did you have to ruin a lovely occasion with your scuminess," Mark Horton, a conductor of the choir, wrote in a message online. The concert was cut short amid safety concerns.

The attack was 'egged on' by teenage girls who screamed and shouted "like the possessed", another witness said.

Police made 110 arrests for affray as fights broke out between demonstrators.

Other arrests were made for assaulting police officers, obstructing police and blocking a public highway. Police held demonstrators inside double decker busses before ferrying them to custody.

The demonstration began as an agreed 'static' protest in Whitehall on Saturday evening against the re-election of President Joseph Kabila, which international observers say "lacks credibility". [N.S.: Oh, yes, of course, a "static protest" planned by hundreds of violent, racist, masked thugs.]

The vast central African country has immense mineral wealth but has been ravaged by civil war, corruption and economic mismanagement. Protestors accuse Western governments of propping up the regime.

On Thursday a group of 200 Congo demonstrators forced the evacuation of Oxford Circus tube station, central London, after they set off a passenger alarm on an underground train.