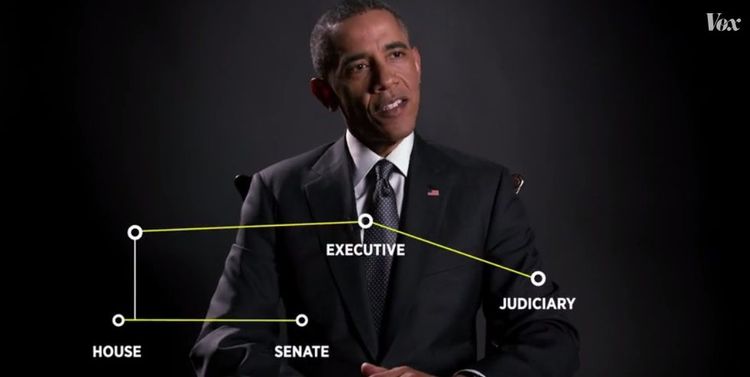 The Vox Interview: In Which Barack Obama Agrees With The Late Sam Francis On The Effects Of Mass Immigration

As conservatives have noted, Vox now is essentially running campaign commercials for Barack Obama [When the Press and the Government Work Together, it Looks Like Vox's 'Interview' with Obama, by Steve Krakauer, The Blaze, February 9, 2015].  But buried in the midst of the banalities are some comments that show the real purpose of mass immigration and the nature of the occupying regime that governs us.

Ezra Klein asks Obama about the problem of political polarization, especially when it comes to racial issues.  The response of the President of the United States is,

I don't worry about that, because I don't think that's going to last. I worry very much about the immediate consequences of mistrust between police and minority communities. I think there are things we can do to train our police force and make sure that everybody is being treated fairly. And the task force that I assigned after the Ferguson and New York cases is intended to produce very specific tools for us to deal with it.

But over the long term, I'm pretty optimistic, and the reason is because this country just becomes more and more of a hodgepodge of folks. Again, this is an example where things seem very polarized at the national level and media spotlight, but you go into communities — you know, one of the great things about being president is you travel through the entire country, and you go to Tennessee and it turns out that you've got this huge Kurdish community. And you go to some little town in Iowa and you see some Hasidic Jewish community, and then you see a bunch of interracial black and white couples running around with their kids. And this is in these little farm communities, and you've got Latinos in the classroom when you visit the schools there. So people are getting more and more comfortable with the diversity of this country, much more sophisticated about both the cultural differences but more importantly, the basic commonality that we have. And, you know, the key is to make sure that our politics and our politicians are tapping into that better set of impulses rather than our baser fears.

And my gut tells me, and I've seen it in my own career and you see it generally, a politician who plays on those fears in America, I don't think is going to over time get a lot of traction. Even, you know, it's not a perfect analogy, but if you think about how rapidly the whole issue of the LGBT community and discrimination against gays and lesbians has shifted. The Republican party, even the most conservative, they have much less ability, I think, to express discriminatory views than they did even 10 years ago. And that's a source of optimism. It makes me hopeful.

However, it goes beyond that.  Obama spends much of the rest of the interview bemoaning things like income inequality or the lack of interest in the common good.  But those are features of mass immigration and a diverse society, not bugs.  Diversity leads to a society of increased social distrust.  It's not surprising that the highest societal value is "get yours."

In his analysis, Obama is essentially agreeing with the analysis of the late Sam Francis.

Mass immigration transforms a country into just a "hodgepodge of folks" who essentially have nothing in common with each other except that they live under the same government.  The constant tension and dysfunction creates its own justification for never ending government intervention and various "community organizers," "community leaders," and other rent seekers.