Obama Reveals His Political Grand Strategy: The Hodgepodgization of America

Here’s part of an interview with the President in Vox that is pretty much along the lines of one of my “Core v. Fringe” election strategy articles, just discussed from the opposite partisan point of view. Obama tells Ezra Klein that he’s not worried about a backlash against Democrats over attacks on whites such as Trayvon and Ferguson because he’s using immigration to frontlash America into more and more of a “a hodgepodge of folks,” and thus opponents will “have much less ability, I think, to express” dissenting views.

Ezra Klein: One of the powerful things that’s happened as polarization has increased politically is it’s begun structuring people’s other identities. The one I’m particularly interested in here is race. If you look back at polling around the OJ Simpson verdict or the Bernhard Goetz shooting in New York, Republicans and Democrats — you basically couldn’t tell them apart. Now you look at the Zimmerman verdict or you look at what’s going on in Ferguson, and opinion on racial issues is very sharply split by party. Do you worry about the merging of racial and partisan identity?
Barack Obama: I don’t worry about that, because I don’t think that’s going to last. I worry very much about the immediate consequences of mistrust between police and minority communities. I think there are things we can do to train our police force and make sure that everybody is being treated fairly. And the task force that I assigned after the Ferguson and New York cases is intended to produce very specific tools for us to deal with it.
But over the long term, I’m pretty optimistic, and the reason is because this country just becomes more and more of a hodgepodge of folks. Again, this is an example where things seem very polarized at the national level and media spotlight, but you go into communities — you know, one of the great things about being president is you travel through the entire country, and you go to Tennessee and it turns out that you’ve got this huge Kurdish community. And you go to some little town in Iowa and you see some Hasidic Jewish community,

I think Obama is trolling here. Ezra later picks up on Obama’s reference to one of the most flagrant hubs of illegal immigration.

and then you see a bunch of interracial black and white couples running around with their kids. And this is in these little farm communities, and you’ve got Latinos in the classroom when you visit the schools there. So people are getting more and more comfortable with the diversity of this country, much more sophisticated about both the cultural differences but more importantly, the basic commonality that we have. And, you know, the key is to make sure that our politics and our politicians are tapping into that better set of impulses rather than our baser fears.

Ezra Klein’s post-interview interjection: Specifically you see this in Postville, Iowa, where a Lubavitcher family’s purchase of a meat-processing plant in the late 1980s has led to the migration of a small community of Hasidim to the area. 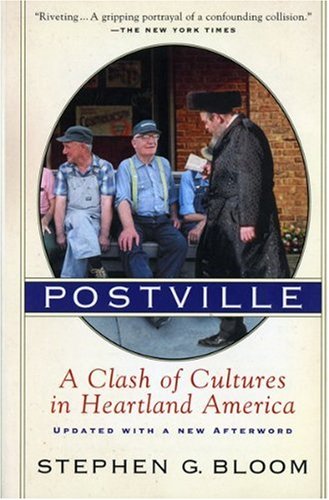 Obvious iSteve Bait from Ezra. Postville has been a notorious example of fringe aggression against core Americans since the publication on 9/10/2001 (poor timing, I’ll grant) of Stephen G. Bloom’s book Postville: A Clash of Cultures in Heartland America. A Jewish college professor went to Postville to write a book about how bigoted small town Iowa people were to ultra-Orthodox Jews just because they were diverse, but wound up writing about how excessively nice Iowans were to the relentlessly un-neighborly and even criminal newcomers.

Then, of course, there’s the Wikipedia article on the Postville Raid:

The Postville Raid was a raid at the Agriprocessors Inc. kosher slaughterhouse and meat packing plant in Postville, Iowa, USA, on May 12, 2008, executed by the U.S. Immigration and Customs Enforcement (ICE) division of the Department of Homeland Security together with other agencies. The raid was the largest single raid of a workplace in U.S. history until that date, and resulted in nearly 400 arrests of immigrant workers with false identity papers who were charged with identity theft, document fraud, use of stolen social security numbers, and related offenses. Some 300 workers were convicted on document fraud charges within four days. The majority served a five-month prison sentence before being deported.

Several employees and lower and middle level managers were indicted on charges of conspiracy to harbor illegal immigrants, aggravated identity theft, and child labor violations among others and were convicted, serving prison sentences between 60 days and 41 months. Neither the owner, Aaron Rubashkin, nor his sons Sholom and Heshy Rubashkin, who were in charge of the management of Agriprocessors, were convicted of immigration and labor law violations. Financial irregularities brought to light by the raid and subsequent investigations led to a conviction of the plant’s chief executive Sholom Rubashkin on bank fraud and related charges. He was sentenced to 27 years in prison, and his trial on immigration charges was canceled.

So, Postville symbolizes both immigration fraud and bank fraud.

The INS was going to raid Postville back in 2000, when it was still a small time illegal immigration hub, but the raid got scrubbed due to the election. Agents heard that the owners were friends with Senator Joe Lieberman and feared political blowback. So they let Postville metastasize for eight years.

Obama: And my gut tells me, and I’ve seen it in my own career and you see it generally, a politician who plays on those fears in America, I don’t think is going to over time get a lot of traction. Even, you know, it’s not a perfect analogy, but if you think about how rapidly the whole issue of the LGBT community and discrimination against gays and lesbians has shifted. The Republican party, even the most conservative, they have much less ability, I think, to express discriminatory views than they did even 10 years ago. And that’s a source of optimism. It makes me hopeful.

Obama is optimistic because freedom of expression is much more limited than even ten years ago.