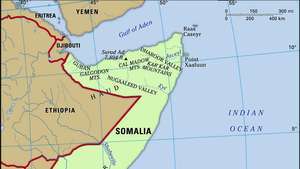 The View From Somalia

"Mohamud's attempt is neither representative nor an example of Somalis. Somalis are a peace loving people."  In the next sentence,  the article continues,  Omaar's "government is holed up in a few blocks of the capital, Mogadishu, while much of the country's southern and central regions are ruled by Islamist insurgents."   Does anyone suppose that this was placed in the article to create some levity?