The Triumph Of Ibram X. Kendi's Logic: The Kids MUST Be Equal, So The Tests Are At Fault

To tell the truth about standardized tests is to tell the story of the eugenicists who created and popularized these tests in the United States more than a century ago.

Ibram X. Kendi is the Andrew W. Mellon Professor in the Humanities at Boston University, director of BU’s Center for Antiracist Research, and author of “How to Be an Antiracist.”

This is an abridged version of a public statement read at the School Committee meeting on Wednesday in support of suspending the test for Boston’s three exam schools.

Boston Latin’s student body is 46% white compared to 45% of the population of the city of Boston, 29% Asian compared to 10% of the population, 13% Hispanic vs. 20%, and 8% black vs. 25% of the city. Unlike at test-only Stuyvesant and Thomas Jefferson, students are admitted on a combination of grades and test scores, so blacks and Hispanics aren’t as shut out and Asians aren’t as dominant at Boston Latin because it’s pretty easy to get straight A’s at a school with mostly bad students.

What is always best for the community is admission policies that create equal opportunity for all. And we know a policy is creating more equal opportunity — and thereby is antiracist — if it is closing racial and economic inequity. The data is indisputable on the effects of this plan: It will close the racial and economic under-representation at Boston’s three exam schools. And so, I urge you to approve this antiracist proposal.

This is not about me or my child. My wife and I have the resources to one day sign her up for an expensive test-prep course, or hire a test-prep consultant. All the test prep will end up being money well spent: It will have boosted her score to get into an exam school.

It is like allowing certain NFL teams more time to practice in the off-season and, when those teams regularly win the Super Bowl, somehow claiming the rules are fair. And when you try to take away the practice advantage from those winning teams, they are going to resist. They are going to claim their teams are the best; all the while they’ll know privately, they were legally cheating.

This is the elephant in the room that the people claiming the standardized test is fair do not want to discuss. They will claim white and Asian kids on average score higher on tests because they are smarter or work harder. Meaning Black and Latinx kids are not as smart or not as hard-working. Meaning white and Asian kids are superior. And all these racist ideas from people claiming they are not racist. …

And to tell the truth about standardized tests is to tell the story of the eugenicists who created and popularized these tests in the United States more than a century ago. Stanford University psychologist and eugenicist Lewis Terman introduced and defended the viability of the nation’s first popular standardized intelligence test in his 1916 book “The Measurement of Intelligence.”

After all, what has the Terman family ever done for Silicon Valley?

These “experimental” tests will show “enormously significant racial differences in general intelligence, differences which cannot be wiped out by any scheme of mental culture,” Terman maintained.

In truth, racial differences in test scores are highly malleable, as this graph shows: 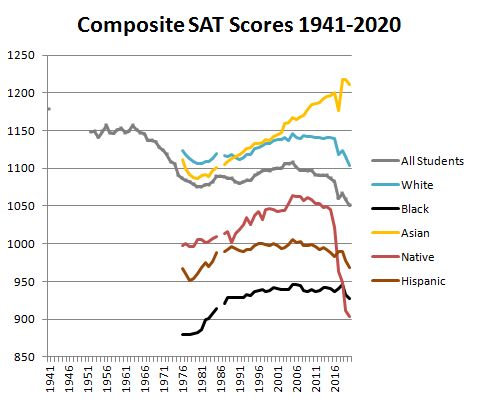 As you can see, there’s been a radical reshuffling in the top rank of races over the last 40 years, with Asians becoming hugely dominant. Which proves cognitive testing is just a giant White Supremacist conspiracy.

By the 1960s, genetic explanations had largely been discredited. Since then, lower test scores from Black and Latinx students have been explained by their environment: Their supposedly broken cultures, homes, schools, and families have made them intellectually inferior. Standardized tests have become the most effective racist weapon ever devised to objectively degrade Black and brown minds and legally exclude their bodies.

As I pointed out in my Taki’s column, Kendi keeps making this argument and keeps winning because nobody respectable dares contradict his argument.