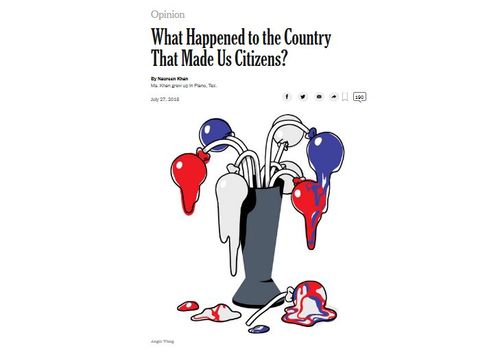 From the NYT Opinion Page:

What Happened to the Country That Made Us Citizens?

Ms. Khan grew up in Plano, Tex… Naureen Khan is a writer and senior researcher at “Full Frontal With Samantha Bee.” She lives in Harlem.

People contain multitudes — especially Texans. Given this country’s painful history, in which even incremental racial progress is always met with ferocious backlash, I should have known better. I should have known that the polite acceptance our neighbors showed us, their tolerance for the drippings of our culture, didn’t necessarily signal a deeper acknowledgment of our humanity. I wanted to believe in all those rah-rah myths about our glorious melting pot, but the truth is, we, like everyone else, will have to fight for our place here.

A majority in Collin County — the place where I was a parking lot attendant at the annual hot air balloon festival, the place where I dropped out of mosque school because it was so boring — voted for Donald Trump, a man who has aligned himself with white supremacists.

Since taking office, he has fired off a series of attacks against immigrants. He calls us animals. He inflicts unimaginable cruelty onto the children of migrants. His administration is now questioning the citizenship of the 20 million of us who were naturalized. He does so for and with the tacit approval of white Americans who continue to be his most durable and committed source of support.

I get teary-eyed just thinking about how there are still seven billion people left in the world not yet living in America. Someday, I dream, they will all immigrate to America so they can hector us the way Ms. Khan does.

What happened to the country that made Naureen Khan a citizen?

It made Naureen Khan a citizen. That’s what happened to it.