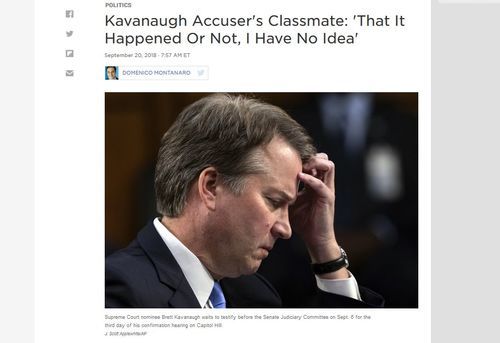 A former classmate of Christine Blasey Ford tells NPR that she does not know if an alleged sexual assault by Supreme Court nominee Brett Kavanaugh took place as she first suggested on social media.

“That it happened or not, I have no idea,” Cristina King Miranda told NPR’s Nina Totenberg. “I can’t say that it did or didn’t.”

That’s different from what Miranda wrote Wednesday in a now-deleted Facebook post that stated definitively, “The incident DID happen, many of us heard about it in school.”…

“In my [Facebook] post, I was empowered and I was sure it probably did [happen],” Miranda told NPR. “I had no idea that I would now have to go to the specifics and defend it before 50 cable channels and have my face spread all over MSNBC news and Twitter.”

Miranda noted on Twitter that she did not have “first hand knowledge” of the incident.

To all media, I will not be doing anymore interviews. No more circus. To clarify my post: I do not have first hand knowledge of the incident that Dr. Christine Blasey Ford mentions, and I stand by my support for Christine. That’s it. I don’t have more to say on the subject.

Miranda said staff from the Senate Judiciary Committee had reached out to her, something she was not expecting. She said she will not go through with a committee interview if asked.

Miranda says she played soccer with Ford — whom she refers to as Chrissy — in high school and that she continues to support her. Miranda added that despite not knowing specifics of what went on at the party three decades ago, she remembers that there was a “buzz” that went around possibly on a weekend about the party where an alleged incident involving students from her school and Kavanaugh’s took place.