The man who scaled the White House fence and was able to run through the front doors made it farther into the building than was previously reported, CBS News has learned.

The man, 42-year-old Omar J. Gonzalez, ran unobstructed for 70 yards across the front lawn of the White House before entering through the North Portico. On the way, he brushed by a Secret Service officer with a drawn gun, sources tell CBS News’ Bill Plante.

Gonzalez then proceeded to run through the entrance hall to the cross hall of the White House, past the staircase that leads up to the first family’s residence. He was confronted by a female Secret Service agent, who he overpowered

“Overpowered” is not good

, and made it all the way to the East Room, Rep. Jason Chaffetz, R-Utah, told CBS News, citing whistleblowers.

Previously, it was reported that Gonzalez only made it through the north doors of the White House – which were apparently unlocked – before being apprehended by the Secret Service.

The agency declined to comment, citing an ongoing investigation into the incident. The White House says the results of the review will “further enhance” security.

“He had just gotten inside the door [of the North Portico] . . . And was then wrestled to the ground by one of the Secret Service personnel . . . in the foyer,” former Secret Service Director W. Ralph Basham, told CBS News, explaining his understanding of the apprehension. Basham spoke with current director Julia Pierson as recently as this weekend.

Wasn’t there a big feminist putsch a couple of years ago, using a prostitution scandal as a pretext, to turn the Secret Service over to female control? How’s that working out for the Obamas? Sounds like Michelle Obama’s feelings of feminist solidarity evaporated at the thought of her family being murdered in their home by some random male loony who can overpower a female Secret Service agent.

Novelist and film critic Steven Hunter co-wrote American Gunfight, the true story of how two brave Puerto Rican nationalists attempted to assassinate President Truman while the First Family had relocated to Blair House for redecoration of the White House. They were stopped by equally brave American men. From my book review in VDARE.com:

Two immigrant Nationalist operatives, Torresola and Collazo, apparently decided to move the assassination up five days and headed for Washington. This acceleration of the schedule probably kept it from succeeding—some say the original called for five gunmen, which should have been more than enough. Further, the pair only brought one pistol each. Having to pause to reload their German automatics under fire proved fatal. 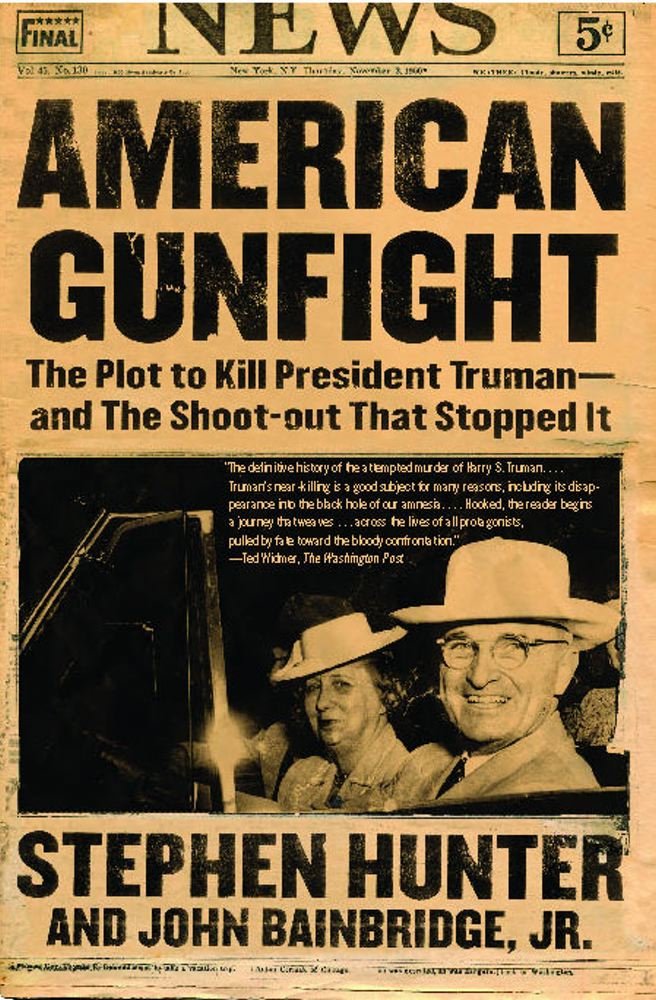 Still, the strategy they improvised a few hours before their assault nearly worked:

“This plan was quite elegant… The whole point of the plan was to overcome the defenses with a stunning blast of firepower, disorient and dis-coordinate the response, then hunt the President down in Blair.”

From opposite directions, they simultaneously approached the policemen on the sidewalk in front of the Presidential residence and shot them point blank, with Torresola putting three slugs in White House Policeman Leslie Coffelt, mortally wounding him. Torresola, an expert shot, then wounded two more guards, while his less skilled compatriot Collazo blasted away at the Secret Service agents at the other end of the sidewalk, who remained unaware of Torresalo's existence. Meanwhile, the agent inside Blair House struggled to unlock the cabinet holding a Tommy gun.

Awoken from his nap by gunfire, President Truman walked to his second floor window and stood looking out at the gunfight in stunned amazement, only 30 feet from where Torresola was reloading his Luger.

In this crisis, Coffelt, the only American in position to stop Torresola from looking up and shooting the President, stood up despite the three 9-mm rounds in him, staggered to within 20 feet of the terrorist, and, in “what has to be considered the most important shot ever taken by an American police officer,” fired one perfectly aimed bullet into his head, killing Torresola instantly.

Coffelt then sat down and died.

P.S., Or maybe the President okaying the female takeover of the Secret Service after the Cartagena scandal of 2012 wasn’t really about his deep belief in feminist ideas.

Maybe it had more to do with how the First Lady and the First Mother-in-Law would always replay this scene a half dozen times.

And then they would Youtube this music video and giggle about what Michelle’s husband would do in the unlikely event that anybody ever hired him to do the job of Kevin Costner’s character:

Then Michelle and her mother would go look on Netflix for In the Line of Fire and The Wild, Wild West, and when they couldn’t find them, demand that Barack call up the head of the National Security Administration and have him do something useful for once like download their second and third favorite Secret Service movies for them.

It kind of got on the President’s nerves after awhile, so changes had to be made at the Secret Service.