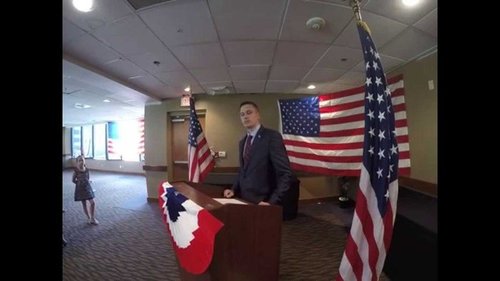 "Florida Man" strikes again, as the Libertarian candidate for Senate is one "Augustus Sol Invictus," currently under attack for sacrificing a goat and drinking its blood. Mr. Invictus is generally described as a "pagan" and was a former member of the Ordo Templi Orientis (OTO) (an organization most people associate with the famous English mystic Aleister Crowley). The Libertarian Party of Florida, as you might expect, is not amused.

Mr. Invictus is extremely charming and persuasive in person, and is a talented public speaker, which makes him all the more dangerous.

Clearly, this man is the absolute antitheses of a Libertarian. Violent Fascist and Neo-Nazi ideologies are completely incompatible with Libertarian values. As such, I had repeatedly and vocally disavowed him and his followers. I advised the LPF that I would continue to speak out against him, regardless of the consequences.

I'm not so sure. Granted, if he's charming and persuasive in person and a talented public speaker, he really is the "absolute antitheses of a Libertarian," at least most of the those in Washington DC. But Mr. Invictus seems pretty by the numbers when it comes to the issues.

The first position listed on his campaign website is, as you've probably guessed, the Drug War. As Ann Coulter noted, with libertarians (especially the capital L variety), it always starts with marijuana.

Mr. Invictus has apparently spoken about himself as a prophetic figure who will herald a great war. But lately he's just recycling the old Libertarian standby, the Non-Aggression Principle [link not safe for work].

He insists, though, that he doesn't advocate violence.

"You do not initiate force," he said. "If the government is waging war on citizens, we as citizens have the right to self-defense on government."

And, most importantly, Mr. Invictus has the following position on immigration.

One of the classical visions of America is that of a melting pot in which anyone willing to work can find wealth and opportunity.  Unfortunately, this vision has gradually been chipped away by restrictions on immigration and naturalization. American citizenship remains highly desirable, but immigrants today are left with no choice but to enter the country illegally – which often results in immigrants forming insular communities and failing to fully integrate.  We would support policies that streamline the process of immigration and naturalization so that immigrants who wish to integrate and work in America can do so with ease.

Of course, what's actually destroying the "melting pot" of American identity are multiculturalism and government incentives for people to "de-assimilate" and agitate for government handouts on the basis of their race. Needless to say, there is no mention of racial preferences or official multiculturalism on the "focal points" page. Naturally, there is still time to call for abolishing the FDA.

For what it's worth, Mr. Invictus denies being a racist, claiming he has four Hispanic children [Florida candidate for U.S. Senate admits to sacrificing goat, drinking its blood, by Brendan Farrington, Orlando Sentinel, October 5, 2015].

So what are we left with? An edgelord with militant posturing coupled with a pro-open borders, pro-Establishment position on the most important question of the day?

I don't know, Mr. Wyllie. That sounds like just about every libertarian I've ever met.

I have prophesied for years that I was born for a Great War; that if I did not witness the coming of the Second American Civil War I would begin it myself. Mark well: That day is fast coming upon you. On the New Moon of May, I shall disappear into the Wilderness. I will return bearing Revolution, or I will not return at all.

War Be unto the Ends of the Earth

If you actually were trying to start the Second American Civil War, the best way to do it would be to facilitate unlimited immigration from the Third World. Perhaps Mr. Invictus has been telling the truth all along.