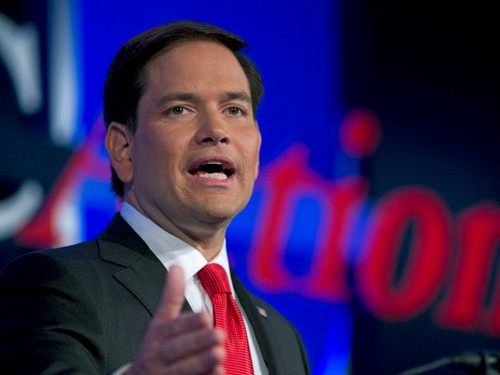 Rubio: Amnesty Critics Have A Point

Sen. Marco Rubio, a big supporter of "immigration reform," says that critics of such reform, which he would never call amnesty, make a valid argument.

Sen. Marco Rubio (R-FL) still supports immigration reform, including the ability for illegal immigrants to apply for green cards. But in a recent media interview, he admitted that his quest for reform would be difficult to pass through Congress, even acknowledging that critics have a valid argument against it.

When asked by CNBC’s John Harwood if he still supported the Gang of Eight proposal allowing illegal immigrants should be allowed to apply for green cards in 10 years, Rubio indicated on CNBC that that he didn’t – because it would be impossible to pass. But Rubio admitted that he was open to the idea that illegal immigrants should be able to apply for green cards in the future.

“I have always said that I’m open to people having access to apply for a green card,” he said, arguing that it was wrong to have millions of illegal immigrants in American who would never be allowed to become citizens.

But Rubio was realistic in the interview about any immigration reform passing in the near future, even calling the argument against amnesty from critics “valid” regarding a pathway to citizenship.

“The argument you hear from people is, why should someone who came illegally be able to access citizenship or a green card faster than someone who came here legally,” he said. “It’s a very valid argument and one that will serve as a strong impediment to making progress on immigration.”

Yet if the critics are right — that amnesty would reward illegals with something to which they are not entitled — why does he favor it?

Think about affirmative action. All politicians — all of them — know that such quotas unjustly punish qualified whites and promote unqualified minorities. But they support the policy because it means votes from minorities. Almost all those votes go to Democrats.

As well, all politicians — all of them — know that welfare and food stamps actually harm the poor. But they support such welfare because it means votes from minorities. Almost all those votes go to Democrats.

The GOP knows this, and feels safe opposing these left-wing policies.

Likewise, all politicians, Rubio and the Republicans included, know amnesty is morally and practically wrong. It's also stupid. But Republicans have convinced themselves that amnesty means votes for the GOP, and insulation from the charge of racial animus toward dark-skinned "migrants," as they are now called.

They think it means political power. That's the only reason they can support something that is so obviously wrong for the country.

But almost all the votes that arise from amnesty will go to the same politicians who supported welfare, food stamps and affirmative action: Democrats.

One can only conclude that Rubio is willfully blind, or woefully deceived, despite all those smarts we keep hearing about.