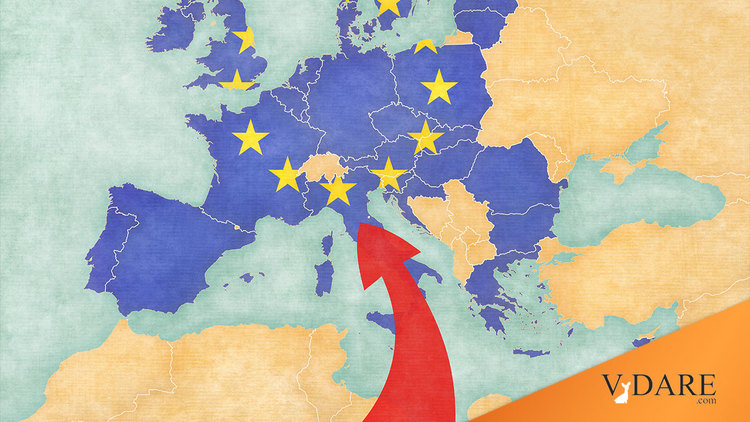 The Rape of Europa—Is Europe Supposed To Relax And Enjoy African Immigration?

Have you ever noticed how rapey the pro-immigration conventional wisdom has become?

UN demographers recently forecast that the population of Africa would quadruple to four billion in this century. That seems implausible since a lot of the current billion are already trying to get into Europe.

From the Toronto Star:

Europe needs to embrace the migrants appearing on its shores and create a meaningful refugee settlement program that will put human smugglers out of business and save countless lives, says the United Nation’s special rapporteur on human rights of migrants.

European Union attempts to “seal” borders will continue to fail and more migrants will lose their lives at sea if fleeing refugees aren’t given the right to settle where they want, François Crépeau said on Thursday from New York.

“I don’t see any other solution for Europe,” he said. “They need to open the borders.”

The Mediterranean Sea has become a graveyard of desperate migrants on the run from poverty and conflict, looking for a better life. Last year, more than 3,000 died making the crossing from Africa to Europe, according to the International Organization for Migration.

Crépeau, who is also an international law professor at McGill University, said if Europe wants to stop the human suffering it must put its faith in regulated openness and mobility. “European states need to create an operation where saving lives is the first objective.”

After the Lampedusa tragedy, Italy decided that saving lives was more important than anything else. In October 2013, 366 died when their boat capsized en route to the Sicilian port of Lampedusa. The Italians started the life-saving Mare Nostrum program to proactively patrol international waters.

“Lampedusa was an electroshock to Italy,” said Crépeau. “They really felt responsible. The people who died in Lampedusa were given posthumous Italian citizenship.”

You’ll be amazed to learn that that didn’t discourage Africans from coming.

… Joel Millman, a press officer for the IOM in Geneva, said Europe needs to accept and manage migration.

“We appreciate border security is a shared responsibility. We don’t think everybody should be allowed in — not terrorists or pedophiles. But you can’t ignore certain truths here. Europe is close to massive conflict zones,” he said.

“Libya is a day away from Europe. To say, ‘This must stop and we won’t tolerate it,’ well, fine, but what is the answer? You can’t ignore it. How can you ignore people fleeing Boko Haram in Nigeria?” Millman asked.

“We need to open up the channels of legal resettlement,” he said.

Many migrants know exactly where they want to go. They have family in Germany or in Northern Europe. “We think the capacity is there. If you start with people who have relatives and who are wiling to take people in, there is a start,” he suggested. “The EU can’t escape it. This is their future. They should actually embrace it,” Millman said.

It’s striking how UN officials use metaphors of rape to tell Europeans they must lie back passively, open up, and embrace their fate.

The real solution, of course, is that you rescue illegal infiltrators (to use the Israeli government’s term) from the sea, then you lock them up for a prison term of, say, three years, then you deport them. That creates the right incentives to discourage attempts at illegal immigration.