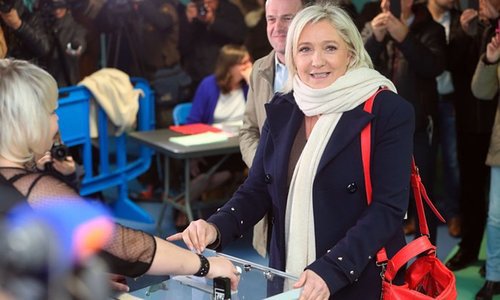 French Jewish Leaders Condemn Le Pen, The Only Leader Likely To Protect Them From Muslims

To nobody’s surprise, and confirming the Open-Borders fix is in among Europe’s elites, France’s ruling Socialists and the potty-trained opposition led by former president Nicolas Sarkozy, now re-named (revealingly, to Americans?) The Republicans, joined forces to urge a vote for anything but the National Front in the December 13th second round. This repeats what they did when Jean-Marie Le Pen reached the final round of the presidential election in 2002. Plus ça change…

Suicidally, given Islam’s views of Jews and the fact that “French” anti-Semitism is now essentially the exclusive province of France’s Muslim diaspora, Official French Jewry also leapt to condemn the National Front. CRIF, the leading French-Jewish group—France’s ADL/AJC/AIPAC-equivalent—issued a call to arms against the National Front:

CRIF calls [on French voters] to vote massively next Sunday to block the National Front, a xenophobic and populist party.

CRIF president Roger Cukierman claims: “For us Jews, this is a dangerous political environment, even though we can count on the support of the governing parties and the opposition Republicans.” CRIF strongly supports mass immigration to France, no matter how hostile the immigrants are. Cukierman even says “it is unworthy for a Jew to vote for the National Front”—although French Jews would be more secure under the National Front, as those parties Jews “can count on” have failed utterly to safeguard France.

CRIF is also firmly in favor of securing Israel. CRIF’s Israel position makes sense, but its France position is insane, and its hypocrisy palpable.

Joining CRIF, the Grand Rabbi of France (there’s no American equivalent), Haim Korsia, pronounced that the French must “reject en bloc those who set one group against another, who promote isolation and exclusion.” The Grand Rabbi mused about how lighting Hanukkah candles leads us to oppose “obscurantism.”

Comment? Hanukkah commemorates the Hasmonean Jews’ revolt against their Seleucid Greek overlords to preserve the Jewish character of Israel—quite understandably. Invoking Hanukkah to defend the destruction of the French character of France through mass immigration is chutzpah indeed.

What explains this suicidal reflex of the French Jewish establishment? France has no Ellis Island, so it’s not Ellis Island Derangement Syndrome.