On Feb 16, Breitbart.com proclaimed: Exclusive Under New Leadership, CPAC Heads in a More Conservative Direction. Could an improvement be in the offing?

It would be super nice if the Conservative Political Action Conference would be conservative in ways many people care about, such as immigration, sovereignty and national security. Breitbart.coms glowing description sounded swell, with lots of attention focused on grassroots interests and such. However, the actual CPAC appears to be the same old Conservatism Inc. package, and in some ways is worse no Ann Coulter speech! She has been a consistent crowd favorite but is missing this year.

The establishment programming in earlier years brought revolts from the citizens.

In 2009, Pamela Geller organized a space near CPAC where Geert Wilders could speak and more than 500 hundred packed the room to hear the Dutch member of Parliament, famous for defending European freedom against Muslim authoritarians. The enthusiasm for the event showed how much interest there was for non-establishment subjects, like the danger posed by hostile Islam.

In the past two years, the Breitbart folks organized satellite meetings where non-establishment topics could be explored by expert speakers. In 2013, The Uninvited provided a forum for counter-jihad activists like Pamela Geller, Robert Spencer and Frank Gaffney, along with Rosemary Jenks speaking about illegal immigration (How to Get Uninvited to CPAC).

Last year, The Uninvited was a full day of speakers and the emphasis was national security (The Uninvited Alternative to CPAC Adds Speakers for Thursday).

But 2015 looks like the bad old days warmed over, but with no Uninvited event for genuine balance. Immigration got a panel on Thursday but it leaned toward the pro-amnesty side.

One wonders about Breitbart. It seems to have been brought inside the big Conservatism Inc. tent, judging by appearance. The Editor in Chief of Breitbart News, Alexander Barlow, introduced Nigel Farage, the leader of Britains UKIP. On Friday, the Andrew Breitbart Defender of the First Amendment Award will be given to Duck Dynasty star Phil Robertson. One of the presenters will be Stephen Bannon, who last year was part of The Uninvited event.

Below, Ann Coulter has been a favorite speaker at CPAC meetings, but she thinks her criticism of immigration amnesty may have scuttled her slot this year. 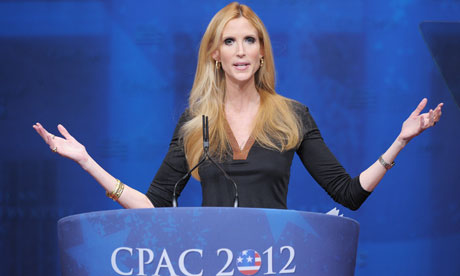 Ann Coulter was not too shy to remark about being this years Uninvited, noting that she might show up anyway so she could be the Bibi Netanyahu of CPAC.

Author and conservative firebrand Ann Coulter was not invited to speak at this years Conservative Political Action Conference, marking the first time in several years that she was not scheduled to attend in an official capacity.

Coulter is usually a popular speaker at the annual conference its the largest gathering of conservatives in the U.S. held this weekend just outside of Washington, D.C. where she has delivered well-received speeches and signed her books for fans.

I wasnt invited, Coulter confirmed in an email Thursday to the Washington Examiner media desk. I might just show up anyway just to piss them off. I could be the Bibi Netanyahu of CPAC. (The Netanyahu mention is a reference to a controversial invite from congressional Republicans to the Israeli prime minister to address Congress.)

Coulter, apparently confused by the snub from conference organizers, said she has been voted best speaker by attendees in previous years.

Lisa De Pasquale, who served as the conference director from 2006 to 2011, confirmed that attendees surveyed after the conference ended consistently chose Coulter as the most popular speaker. You can definitely quote me on that, said Pasquale.

Dave Hemsath sets up a booth selling books by conservative authors each year at the conference. He told the Examiner that her books tend to sell particularly well among attendees. Shes my best seller, he said. He also said he didnt want to speak out of turn but that hes sorry he wont be able to sell as many of her books this year, as he didnt bring as many as usual due to her absence from the speaker schedule.

Coulters strained relationship with conference organizers was also evident at last years event. She said at the time that she was not invited to speak until two weeks before the conference and that it was sprung on her that instead of a solo speaking slot, she was only offered time used to debate a liberal speaker.

Coulter suggested on Twitter that her exclusion might have something to do with immigration reform that includes a pathway to citizenship, a policy front Republicans have struggled with and that Coulter has been intensely critical of. If I want to watch a bunch of rich white people suck up to Mexicans, Ill watch the Oscars again, Coulter tweeted.

Other conservative commentators are scheduled to speak at the conference, including Fox News Sean Hannity and conservative radio host Laura Ingraham, who both spoke on Thursday.

Two separate spokesmen for the conference did not return requests for comment.