Radio Derb Is On The Air: In Defense Of Rudy, Etc. 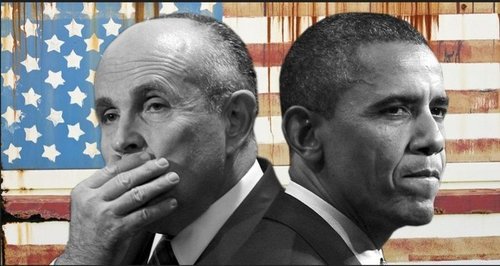 This week’s podcast comments on Rudy Giuliani’s remarks about Barack Obama’s patriotism and background, and notes the pushback from an old friend, the SPCDH.

Rudy also raised the matter of Obama’s 17-years association with the Rev. Jeremiah Wright, a crazy leftist black radical who taught his congregation that the Bible says “God damn America!” Sure, it’s old news; but the fact that Obama was able to brush off this shameful, disgraceful association remains, to my way of thinking, the most powerful piece of evidence that our media elites were willing to overlook absolutely anything, anything at all, to get a leftist black candidate elected. An association like that would have killed stone dead the prospects of any white candidate, of any party.

Again, the standard riposte is that this is all old news, and we’re flogging a dead horse here. Arthur Koestler used to get the same response in the 1960s when he raised the subject of Stalin’s purges and massacres: “Yeah, yeah,” the lefties said, “we know all that, it’s old stuff. Today’s U.S.S.R. is different …” These people, said Koestler, belonged to a worldwide secret society: the Society for the Prevention of Cruelty to Dead Horses, the SPCDH.

The SPCDH is still active, and they’ve been busy in defense of Obama and his radical past.