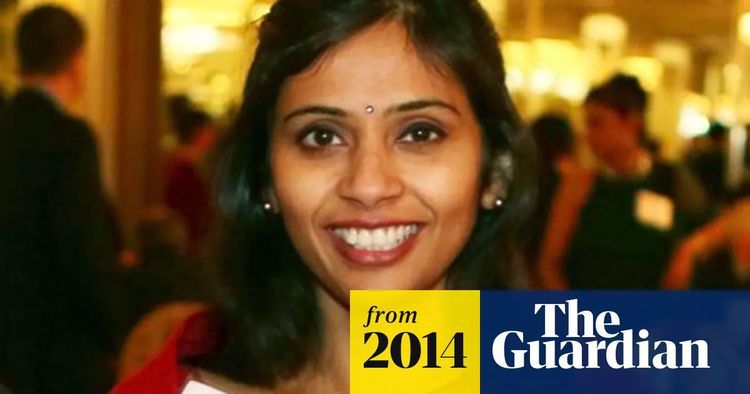 The Indian Diplomat And The Housekeeper: The Lies Aliens Tell

There has been a major dispute in the news recently involving India and the United States. It is ostensibly about the treatment of diplomatic staff in both countries, but the truth is far more interesting.

The true motive behind Indian outrage and the subsequent endangerment of the American diplomatic outpost in New Delhi is about anti-white racism, anti-Christian bigotry, and Hindu supremacism on the part of Indians,  officials and outraged public alike

First, the back story according to the Criminal Complaint: An Indian consular officer, this is important, Devyani Khobragade, Deputy Consul General for Political, Economic, Commercial and Women's Affairs at the Consul General's Office for the Republic of India, was  indicted and arrested for three felony violations of Title 18 of the United States Code (USC), sections 1001, False Statements, 1546(a) Visa Fraud, and 2, Principles.

This was in relation to a visa application Khobragade caused to be submitted on behalf of Sangeeta Richard, an Indian national, hired by Khobragade as a domestic servant. Such a position requires an A-3 visa.

Khobragade presented the U. S. Department of State with a visa application and employment contract that was fraudulent. The law requires that a personal servant of a diplomat be subject to American employment law, including wage rates. Khobragade falsified the employment contract to make it appear to comply with American law, but in reality paid Richard significantly less than the minimum wage, among other labor law violations.

The second part of the back story is the issue of diplomatic immunity. As a consular officer, and not a diplomatic officer, Khobragade holds immunity only for official acts, of which visa fraud is not one. Espionage is, but not visa fraud.

Subsequently Khobragade was arrested based on the complaint. She was, as a matter of course, brought to the U.S. Marshals Office, which processes those arrested for federal criminal offenses prior to their initial appearance before a U.S. Magistrate. At the U.S. Marshals Office, Khobragade underwent the same process as any other arrestee: search, fingerprinting and DNA collection.

Here is where the case gets interesting and Americans learn another lesson on the perils of aliens.

Devyani Khobragade Reveals How She ‘Broke Down’ After ‘Stripping And Cavity Searches’ As Row Between U.S. And India Deepens

The Indian official, Devyani Khobragade, 39, who was arrested on Dec. 12, wrote in an e-mail to colleagues that she was subjected to cavity search during detention.

“I broke down many times as the indignities of repeated handcuffing, stripping and cavity searches, swabbing, in a holdup with common criminals and drug addicts were all being imposed upon me despite my incessant assertions of immunity,” she wrote.

And by interesting, I mean the lies Khobragade tells. While an arrest entails handcuffing, repeated usually means twice; once at the initial point of arrest, in this case by the Diplomatic Security Service Special Agents, and then once more after the subject is processed by the U.S. Marshals. So, for aliens, repeated means twice. And this is only the first of Khobragade's lies. Let us proceed further.

"...stripping and cavity searches..." Any experienced Federal agent would laugh hysterically at that one. First, the U.S. Marshals Service does not perform strip searches on its customer base. The first part of the procedure in the holding area in a Federal courthouse, is a search of the person arrested, even if the person was searched, and the arrestee should have been, by the arresting agents.

Standard procedure is a close search of the person, the placing of the searching Deputy U.S Marshal or Detention Enforcement Officer's hands on the arrestees clothed body and the crushing and twisting of the layer of clothing in a top to bottom pattern, but not a strip search. And note here, the arrestee comes in physical contact with the searching official.

Then the next lie from Khobragade, "repeated cavity searches." Another laugh, as no cavity searches are performed on arrestees except in extraordinary circumstances, commonly with hardened criminals known to commit violence in custody or terrorism suspects.

Of course, high caste Hindus are outraged apparently most of all by the arrest itself. Khobragade was not the first Indian consular officer to be arrested for visa fraud relating to domestic servants.

Foreign Ministry spokesman Syed Akbaruddin said India was “shocked and appalled by the public embarrassment of the diplomat” and called for an immediate apology. India’s National Security Adviser Shivshankar Menon said it was “despicable and barbaric,” the Associated Press reported. A judge in the U.S. Southern District of New York will now decide if her arrest is justified as “a grave crime” considering her diplomatic immunity, Akbaruddin said.

And there is the rub: the mere touching of a high caste Hindu by an untouchable. For the uninitiated, Hinduism is a very primitive religion, untouched, shall we say, by modern considerations of ethics or reason.

The U.S. Marshals official who had the temerity to touch a high-caste Hindu  committed a grave offense in Hinduism and was insulting to all high caste Hindus, especially the Brahmins who dominate India's politics and government. (By the way, in violation of the caste system, as political power is supposed to be exercised by the Kshatriya caste.)

To those with a religious or philosophical system, such an incident would be viewed rationally, as Christians do. A rational person would clearly understand the close association of arrest and search. It is no controversy at all.

For Christians, truth and love are the primary philosophical aspects of their belief systems. The other is personal responsibility for one's actions in life. No Christian can be affected by the mere presence or touch of another person. There is no ritual purity or pollution in Christ, there is only eventual judgement by God for one's behavior. A shadow has no effect on one's moral being, unlike the Brahim who becomes polluted by the proximity of an Untouchable.

And the Hindus know the truth about the failure of their belief system, which is why Hindus reacted so strongly to the mere touch of an Untouchable on a high caste Hindu. Hindus became enraged to hide what they knew to be true, the farcical nature of Hinduism: its ritual obsessions and its moral vacuum devoid of any introspection, intellectual reflection, and its obviously ridiculous pantheon. No one considers the gods of the Greeks, Romans, or barbarians of Europe to be anything other than an inadequate attempt to deal with the vicissitudes of life and explain the natural world around them. One does not accept that Zeus, Hera and Athena existed. They were creations of unenlightened minds. However, Hindu India is the only major society that retains such a primitive religion of hundreds of gods that need appeasing.

And in its irrationality, Hindu India has gravely threatened U.S. diplomatic personnel by withdrawing security around the American Embassy in New Delhi.

India scaled back security outside the U.S. embassy in New Delhi and revoked transit privileges for American diplomats as a row deepened over the arrest and strip-search of a consular official in New York...

Clearly such an over-reaction is based on an inferiority complex, and rightly so, as India is close to a failed state, where slavery is widely practiced and plagued by caste violence.

But these actions by the Indian government were, of course, an actual violation of diplomatic protocol and legal obligations that India has under the Vienna Convention on Diplomatic Relations, which requires the host government to protect diplomats from attack. Such is their religious hatred of Untouchables, India will violate solemn agreements it has signed.

This is hardly a nation the United States should allow immigrants to this country from. Is there no reason in India? Apparently not. They do not even understand the notion of and limitations of consular immunity.

An interesting footnote in this case: Richards and her family have been rewarded for their victimization. Her husband and children have been brought to the United States.

Fifth, as has been reported, the victim’s family has been brought to the United States. As also has been reported, legal process was started in India against the victim, attempting to silence her, and attempts were made to compel her to return to India. Further, the Victim’s family reportedly was confronted in numerous ways regarding this case. Speculation about why the family was brought here has been rampant and incorrect. Some focus should perhaps be put on why it was necessary to evacuate the family and what actions were taken in India vis-à-vis them. This Office and the Justice Department are compelled to make sure that victims, witnesses and their families are safe and secure while cases are pending.

It looks like another case of being a crime victim paying well in gaining U.S. residency.

Of course, Sangeeta Richard may be a Christian, given her last name, or at least a descendant of mixed-race stock, which in India makes one an Untouchable as well.

The real question though remains, do we as Americans want immigrants like this, obsessed with ritual purity and pollution, bringing such behavior to the United States?

Is this misogyny, violence, and anti-Americanism something the United States needs?