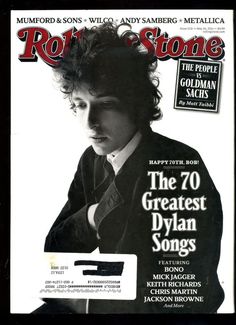 On Monday, in the spirit of the weekly magazine competitions I grew up with across the pond, I invited readers to adjust titles of Bob Dylan songs to make them appropriate to the current election.

There were some worthy efforts.  The one that struck me as cleverest was "Don't Think Twice, It's Alt-Right," from reader DJ.

Reader DT offers "Like a Rolling Stone Rape Hoax" and "All Along the Trump Tower."  Reader JOL adds "The Mighty Spin," no doubt in allusion to the presenting of Mrs Clinton as a champion of the Little Guy.

"Don't Think Twice, Just Talk" from a different reader I'm going to disqualify for being anti-Trump.  Likewise "Ballad of a Thin-Skinned Man" and "Shelter From The Form" (relating to Mr Trump's income tax silence, the entire reasonableness of which I explained a few weeks ago on Radio Derb).

"Blonde on Orange" I don't think is anti-Trump, but I'm disqualifying it anyway; it's the name of an album, not a song.

Thanks to all, and the competition is still open.  Meanwhile I'm awash in nostalgia listening to all the Dylan songs on YouTube (in spite of the performer's very strenuous efforts to protect his copyrights).