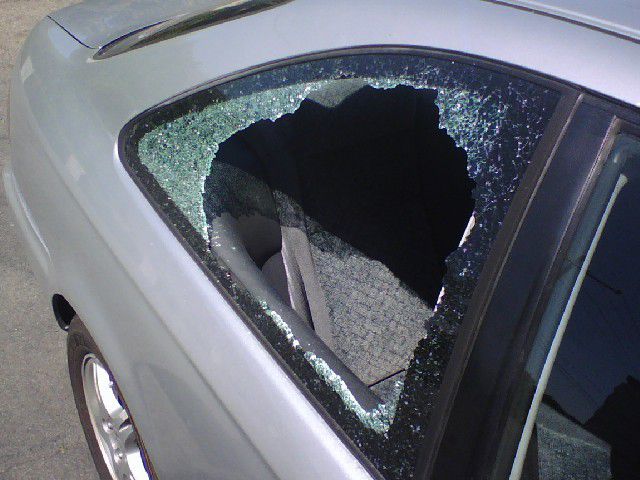 The Good Old Days Are Here Again in California: Smashing Car Windows Is Back in Style

A routine occurrence of the 1970s-1990s was getting your car window smashed by a burglar. There was nothing more fun about living in Chicago than coming back to your car and finding its interior full of broken glass and rain.

Happy days are here again in California … From the Los Angeles Times:

Car burglaries in some California cities are at crisis levels. Prosecutors say their hands are tied

SACRAMENTO — An epidemic of car burglaries in San Francisco over the last few years has led one Democratic lawmaker to propose plugging a loophole in state law that allows some break-ins to go unpunished, but the Legislature has balked at prosecutors’ requests to make obtaining convictions easier.

The proposal, which would eliminate a requirement that prosecutors prove a car’s doors were locked at the time of a break-in, has been shelved two years in a row in legislative committees.

Shouldn’t the burglar smashing the car window to gain entrance be seen as prima facie proof that the car was locked? Help me out here …

Lawmakers struggling with prison crowding and public pressure to enact criminal justice reform have been reluctant to do anything to put more people behind bars. …

“It’s ridiculous that under current law you can have a video of someone bashing out a car window, but if you can’t prove that the door is locked you may not be able to get an auto burglary conviction,” said state Sen. Scott Wiener (D-San Francisco), who introduced the legislation at the request of the San Francisco district attorney’s office.

Wiener said the loophole in state law that his bill targets has hindered prosecutions in San Francisco, where many car burglary victims are tourists who cannot easily return to testify that they left their car doors locked.

Allow me to state for the record that I always lock my car doors, as does my entire family.

Wiener said he was never given an explanation by colleagues who decided to hold the bills in committee, but he said lawmakers have generally been reluctant to approve any measure that has the potential to put more people behind bars. The solidly liberal California Legislature has tried to address prison overcrowding in the last decade by reducing the penalties for many crimes and blocking bills that might increase the number of people going to jail or prison.

“Bills that are perceived to expand criminal liability tend not to do well in the Legislature, although this bill closes a loophole — it’s not creating something new,” Wiener said.

The legislation was opposed by the California Public Defenders Assn., which tied the issue to the rise of homelessness in major California cities.

The brutal California elements, which is why so many of them are out here in the first place: to enjoy the weather.

this expansion of the prosecution and incarceration time for individuals who have not damaged a locking mechanism of the vehicle to gain entry could negatively impact those with the least of means,” the public defenders said in a letter to lawmakers.

They smashed a car window.

… “We’ve got one more piece of evidence that for Democrats, victims come last,” Waldron said. “There’s no reason for someone to enter a vehicle that doesn’t belong to them, whether the door is locked or not. This was a common-sense bill to close a major loophole in our car burglary law, but Democrats have proved yet again that in Sacramento, common sense isn’t common.”

… Assemblywoman Lorena Gonzalez (D-San Diego), the chairwoman of the Assembly Appropriations Committee, declined to discuss Wiener’s bill when asked why her committee shelved it, saying in a statement that costs are always a concern with proposed new laws.

“With billions of dollars of new taxpayer costs being proposed through new legislation every year, the Appropriations Committee considers the merits of hundreds of bills before making very hard decisions about the fiscal priorities of our state,” Gonzalez said.

Number-crunchers for Gonzalez’s committee estimated the bill would have cost courts “hundreds of thousands” of dollars for more prosecutions, while counties might face up to the “low millions” of dollars in expenses to handle increased jail populations.

In contrast, you having to pay to fix your car window is your problem, you loser.

In another high-profile case this year, authorities broke up a car burglary ring comprising dozens of Chilean nationals who entered the country on tourist visas and ransacked scores of cars, homes and businesses in Southern California.

What’s a good security video system to get?