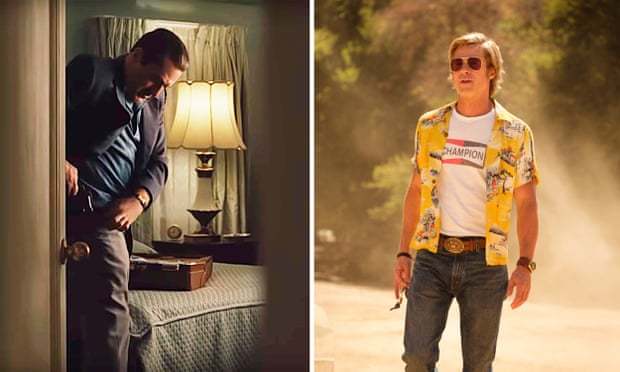 GUARDIAN: Before the Great Awokening, Nobody Had Ever Heard of "Thou Shalt Not Kill"

Once Upon a Time in Hollywood and The Irishman are full of male brutality – but are they doing anything to move the discussion forward?

All works of art these days have to have to fit into the strict agenda of The Conversation. Artists must never distract from The Discussion with digressions about their own personal interests.

This year we have been given two new masterworks from two old masters, and they’re strikingly similar in subject. Quentin Tarantino’s Once Upon a Time in Hollywood and Martin Scorsese’s The Irishman are both examinations of male-dominated worlds that orbit and adore violence. Both present vibrant ecosystems of toxic masculinity. And both reveal much about the largely male environments they present and the shocking violence within them, through the way they think about their central female characters.

Margot Robbie’s Sharon Tate is the personification of the fantasy world Tarantino creates in Once Upon a Time in Hollywood: free and joyous, and protected by Tarantino in his film from the violence wreaked on her in reality. The Irishman’s Peggy Sheeran (daughter of Robert De Niro’s mafia hitman Frank Sheeran), and her much-discussed near-muteness, represents something different. It’s through Peggy’s consistent, traumatised silence that Scorsese highlights the true horror of the milieu he’s examining; she sees the old, male world of her father for the self-destructive farce it is.

Thank goodness that Woketivists recently came up with their moral and intellectual conceptual breakthrough: “Thou shalt not kill.”

The long, slow ending of The Irishman has (non-spoiler alert) the now elderly mobsters in prison and a nursing home talking to priests. This complete lack of action drove a lot of viewers crazy, but was for others the most impressive part of the movie.

In reality, Sheeran got old and started to feel a little guilty about not providing an inheritance for his four daughters. So he started talking to his defense lawyer about writing a tell-all book that would be a bestseller and leave his children some money.

First, Sheeran, while being a bad guy, was probably only tangentially involved in murders. He’d been charged with conspiracy to commit murder (but beat the rap), for example, but few experts believe he ever pulled the trigger on anybody, much less on the most famous unsolved murder of the 1970s.

But, to get a bigger publishing contract, over the course of lengthy discussions with his lawyer / ghostwriter he increasingly upped the ante on plausibility and eventually implied he’d committed almost as many murders as gameshow producer Chuck Barris claimed in his memoir, Confessions of a Dangerous Mind that he’d carried out for the CIA.

On the other hand, Sheeran didn’t want to spend his last months in jail being charged with the murder of Jimmy Hoffa, so he and his lawyer made sure their final draft didn’t actually include him legally quite incriminating himself. It’s all kind of like O.J.’s If I Did It moneymaking scheme.

So, Scorsese and his screenwriter Steve Zaillian convert this sleazy history of indirection and vagueness involving client-lawyer/writer privilege into something closer to the old altar boy’s heart: Will Sheeran complete the sacrament of Confession of his crimes to a priest? It’s precisely the audience’s awareness that this situation has happened for a couple of thousands years that adds resonance to the long ending.