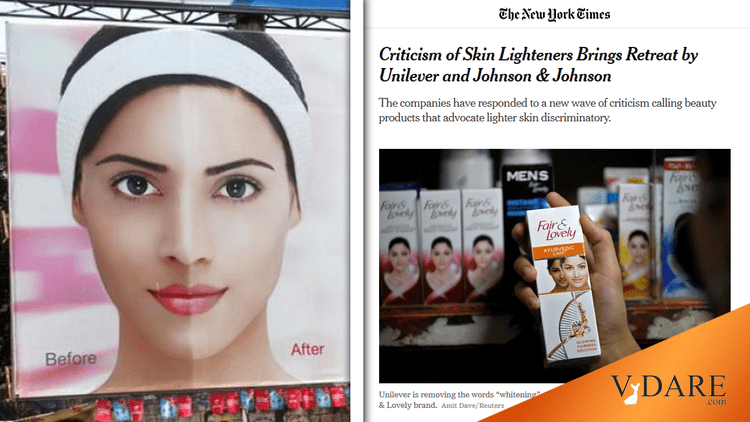 Unilever is removing the words “whitening,” “lightening” and “fairness” from its packaging for its Fair & Lovely brand.

As major consumer products companies have rushed to declare their opposition to racism in response to the national outrage over the killing of George Floyd, many of them have been accused of openly promoting a beauty standard rooted in racism and discrimination.

Unilever, Procter & Gamble, L’Oreal and Johnson & Johnson — some of the world’s biggest advertisers — sell beauty products that advocate lighter, whiter skin in Africa, Asia and the Middle East. Those products are not marketed in the United States, but the sales of the skin lighteners have drawn criticism, especially from South Asians, for perpetuating colorism — the term describing the preference for lighter skin — in other countries, under popular brand names like Pond’s, Olay, Garnier and Neutrogena, and their own labels like Fair & Lovely.

The backlash appears to be forcing action. Unilever said on Thursday that it would remove the words “fair/fairness, white/whitening, and light/lightening” from product packaging and communications and change the name of its Fair & Lovely brand, a juggernaut in India that has marketed lighter skin as a path to success for decades. …

“We recognize that the use of the words ‘fair’, ‘white’ and ‘light’ suggest a singular ideal of beauty that we don’t think is right, and we want to address this,” said Sunny Jain, Unilever’s president of beauty and personal care. …

What kind of U-boat captain name is “Sunny Jain”?

In South Asia, anti-blackness and colorism have origins that predate colonialism and systemically reinforce differences in caste and class. …

Skin-lightening products are estimated to be a multibillion-dollar market, though its precise size is difficult to estimate, particularly as brands alter the language on their products to less overtly promote changes in skin tone. Fair & Lovely, for example, will continue to be sold, though Unilever noted it had removed “before-and-after impressions and shade guides that could indicate a transformation.”