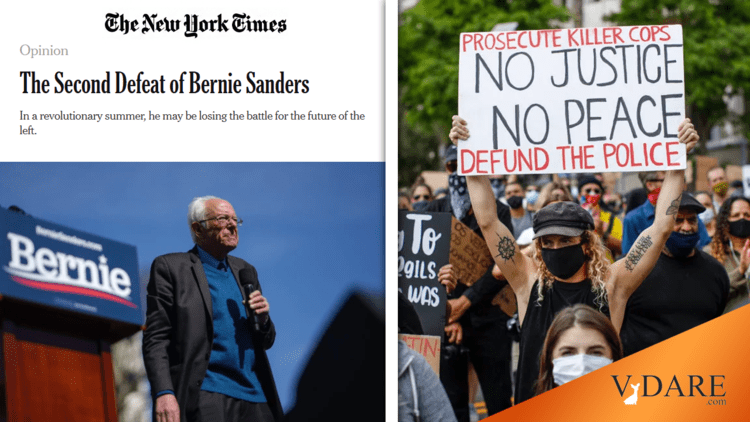 The Second Defeat of Bernie Sanders
In a revolutionary summer, he may be losing the battle for the future of the left.

… Throughout his career, Sanders has stood for the proposition that left-wing politics lost its way after the 1970s by letting what should be its central purpose — the class struggle, the rectification of economic inequality, the war against the “millionaires and billionaires” — be obscured by cultural battles and displaced by a pro-business, pro-Wall Street economic program. …

Now … Rather than Medicare for All and taxing plutocrats, the rallying cry is racial justice and defunding the police. Instead of finding its nemeses in corporate suites, the intersectional revolution finds them on antique pedestals and atop the cultural establishment.

And so far, as my colleague Sydney Ember noted last week, this revolution has been more unifying than Sanders’s version — uniting the Democratic establishment that once closed ranks against him, earning support from just about every major corporate and cultural institution, sending anti-racism titles skyrocketing up the best-seller list, even bringing Mitt Romney into the streets as a marcher and inducing Donald Trump to make grudging noises about police reform.

Ember quotes the law professor Kimberlé Crenshaw, the theorist of intersectionality, marveling at the change: “You basically have a moment where every corporation worth its salt is saying something about structural racism and anti-blackness, and that stuff is even outdistancing what candidates in the Democratic Party were actually saying.”

… Rather, it’s that anti-racism as a cultural curriculum, a rhetoric of re-education, is relatively easy to fold into the mechanisms of managerialism, under the tutelage of the human resources department. The idea that you need to retrain your employees so that they can work together without microaggressing isn’t Marxism, cultural or otherwise; it’s just a novel form of Fordism, with white-fragility gurus in place of efficiency experts.

Floydism is the new Fordism.

If every corporation in America and Western Europe has to waste time on Let’s Talk About My Hair training run by aggrieved black ladies, then no corporation falls behind any other. Sure, maybe some firm in Gdansk gets a leg up, but the Poles can be dealt with.

In our cultural institutions, too, the official enthusiasm for the current radical mood is suggestive of the revolution’s limits. The tumult and protest is obviously a threat to certain people’s jobs: The revolutionaries need scapegoats, examples, wrongthinkers to cast out pour encourager les autres, superannuated figures to retire with prejudice. But they aren’t out to dissolve Harvard or break up Google or close The New York Times; they’re out to rule these institutions, with more enlightenment than the old guard but the same fundamental powers. And many of the changes the protesters seek are ones that the establishment can happily accommodate: I can promise that few powerful people will feel particularly threatened if the purge of Confederate monuments widens and some statues of pre-World War II presidents and Franciscan missionaries come crashing down as well. (Though renaming Yale might be another matter …) …

The destiny of liberalism, for some time now, has looked like handshake agreements among corporate, academic and media power centers, with progressive rhetoric deployed either reassuringly or threateningly, depending on what’s required to keep discontented factions within the elite in line. The promise of the Sanders campaign was that the insights of the older left, on class solidarity above all, could alter this depressing future and make the newer left something more than a handmaiden of oligarchy, a diversifier of late capitalism’s corporate boards.