Neymar Jr., the star of the Brazilian national soccer team who was severely injured by a knee to the back by a Colombian player in a World Cup quarterfinal, has been doing a Sammy Sosa in recent years.

Above is the wealthy Neymar of 20014, with his current Orange County skate punk look.

Yeah, it’s really him. Here’s another picture from 2009 below.

South Americans spend a lot of money on hair straightening, skin lightening, plastic surgery, colored contact lenses, make-up, and who know what else. Much of their effort is devoted to transracialism. And they’ve gotten quite good at it.

As I’ve been pointing out for many years, the widespread assumption you see all the time in the American press that whiteness is tainted and uncool is not shared by the Third World.

The basic reason for this was explained by Peter Frost: the untanned skin of women is on average about 10% fairer than of their own brothers. So, fairness is linked in the popular mind to femininity, just as, say, long hair is (women’s hair apparently grows longer when uncut than men’s hair on average).

That’s why the poets went on and on about “the fair sex.”

Hard to tell what Neymar III will look like

Back in 2000 in VDARE, I raised one of the most fundamental yet mysterious questions about Mexico (and all of Latin America): after a half-millennium of interracial mating, why are white people still on top? Why is their so much correlation between racial looks and social class?

After almost twenty generations of intermarriage between whites and Indians, Mexico has ended up with an almost wholly white elite, a vast mixed race (mestizo) working class, and at least 10 million extremely impoverished pure Indians who have never assimilated into Hispanic culture. And the ruling class is becoming ever whiter. How did this happen? And what does it portend for America's dream of colorblind equality? …

I'll follow Jared Diamond (Guns, Germs & Steel: The Fates of Human Societies) in stipulating that the conquistadors won solely because by luck they had the guns, germs, and steel on their side, and that the only reason they had superior technology was because Spain was less isolated than Mexico.

Now, imagine a conquistador and his Indian woman have two sons in the 1520s. These two mestizo brothers grow up and go out in the world to seek their fortunes. One is smarter, and he strikes it rich. The other wasn't so lucky in the genetic lottery, and he becomes poor. The rich son has a wide variety of potential wives to choose from. Like most men, and like almost all Mexican men, he is more attracted to blonde women, and thus marries one. (If you aren't familiar with the depths of Mexico's blonde obsession, try watching Spanish-language TV shows. Almost all the women on Mexican TV look like Finns.) His impoverished brother, in contrast, cannot attract a blonde wife. So he marries an Indian girl.

Then, the brothers have children. On average, the smarter, richer brother's kids, who are 3/4 white, are smarter than their underprivileged 1/4 white cousins. They're smarter not because they are whiter, but because their father had more smartness genes than their uncle. This trend continues: in both families, the smartest, most energetic, and most ruthless sons marry the blondest wives, while the blondest daughters marry the husbands with the most Right Stuff. Repeat for another dozen and a half generations. By 2000, this pattern could lead to the most European-looking people being the most naturally formidable, even if they weren't when they arrived in 1519.

Now, in Mexico every century or so, there is a massive upheaval like the Revolution of 1910. The white monopoly is fractured. Up through the cracks come the most talented mestizos and Indians. They start dynasties that persist to this day … but their grandsons and great-grandsons are notably whiter than they were, since the men of the family have been exploiting their social ascendancy to marry white women. 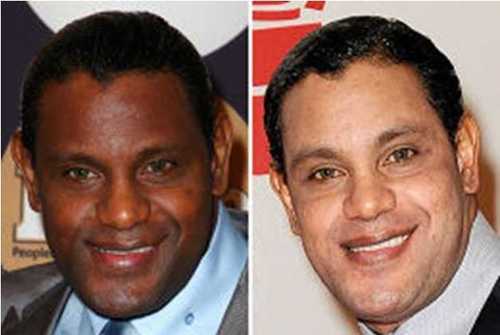 Sammy Sosa, before & after

On an American note: like I’ve been saying, the political conventional wisdom that the Obama Coalition of cool Americans united under black leadership in their mutual revulsion against the awfulness of white men only sounds sensible if you’ve been thoroughly indoctrinated in The Narrative.

Still, to North Americans, a guy spending a lot of money to look whiter looks kind of gay, as ex-slugger Sammy Sosa proved when he got into his wife’s cosmetics cabinet.