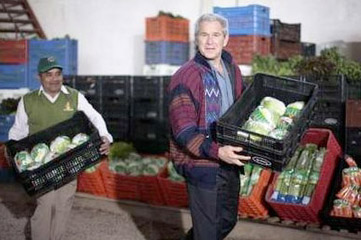 I hope the Republicans don’t go entirely loony with adoration of George Bush during his book tour. The temptation is there because even though Bush wasn’t much of a conservative given his open-borders policies, globalist tendencies and do-gooder deficit spending (e.g. $48 billion for AIDS treatment in Africa), no one thought he was a socialist, unlike the present occupant of 1600 Pennsylvania Ave.

My articles called GWB the Mexichurian President because of his loathsome pandering toward our hostile neighbor. Bush bent over backwards to help gangster Mexicans even if it meant persecuting American law-enforcement officers, as in the case of Border Patrol agents Jose Compean and Ignacio Ramos, who were unjustly railroaded to prison for shooting a drug smuggler by the Bush administration. Bush finally commuted their sentences on the last day of his presidency, after they had served two years.

The mellow Bush routine hasn’t made Rep Dana Rohrabacher (R-CA) forget either, as he recently tweeted (noted by The Hill):

George Bush was interviewed by Rush Limbaugh on November 9, and you can see the rewrite of history being generated. Bush says he never was for amnesty, just something identical to it.

PRESIDENT BUSH: I think the federal government ought to have a comprehensive immigration law and the fact there isn’t one caused Arizona to react. And, as you know, I laid out a comprehensive plan that I believed would work when I was president. I still believe it will work, and in the book I talk about that decision to try to get legislation passed.

RUSH: What was the objective of that legislation? What were you trying to accomplish with your comprehensive immigration reform because many people thought it was amnesty and they opposed it.

PRESIDENT BUSH: No, I know, and that’s what happens a lot of times these issues get labeled and people react poorly. I couldn’t have said it more plainly: I was against amnesty. I don’t know many people who were for amnesty when it comes time for comprehensive reform. I’m sure there’s some, but, you know, all that would do if you granted amnesty is encourage the next wave to come. I was trying to basically recognize that our economy required immigrants to work. I mean, there’s a lot of jobs Americans won’t do and therefore there needed to be an orderly, legal way for people to come and work on a temporary basis and that if you’d paid your taxes and had been here for a while and were a good citizen you had a chance to become a citizen, but you had to get at the back of the line. It was a plan that I felt addressed the issue in a good way. There is no plan – obviously there’s no plan, a comprehensive plan – yet, and therefore states like Arizona are reacting.

RUSH: The politics of it, though. Many people feared the Democrats simply wanted to register all these people as new Democrat voters. They weren’t concerned about any compassion; they weren’t concerned about labor markets or any of that. They just saw an avenue for more Democrat votes and registration, and when Republicans are going along with it, people are pulling their hair out saying, ”Why do we want to help the Democrats in their political efforts?”

PRESIDENT BUSH: No. I know, I know. Look, a lot of people view things through a political lens. I thought it was good policy, though – and not all Democrats were for it on Capitol Hill, either, I might add. Anyway, it’s still an issue and needs to be solved at some point in time.