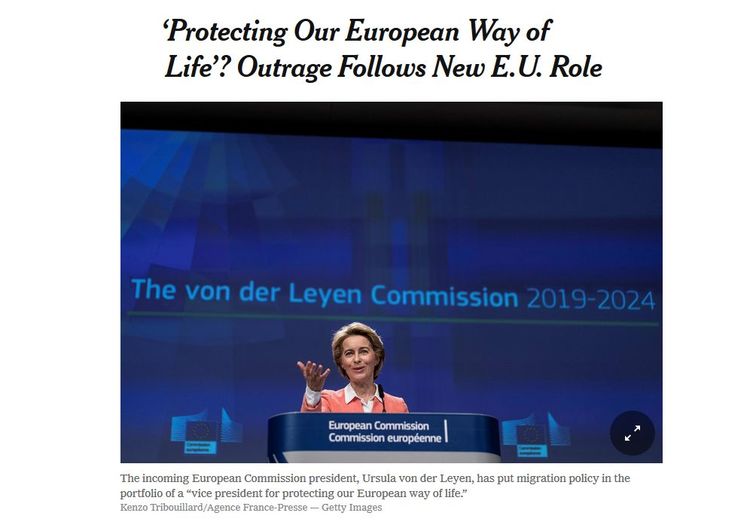 BRUSSELS — When Ursula von der Leyen, the incoming chief of the European Union’s powerful administrative branch, unveiled her top team at a news conference on Tuesday, one new job title provoked a sea of puzzled faces: “vice president for protecting our European way of life.”

But when she then tried to explain what the role would involve — responsibility for migration policy, among other things — the puzzlement turned to outrage. Critics denounced the phrasing as an echo of far-right rhetoric that identifies Europe as white and Christian, and migration from the Middle East and Africa as a threat to that identity.

The outrage has only grown, with pressure mounting on Ms. von der Leyen to scrap the title altogether. By Thursday, even the man Ms. von der Leyen is scheduled to succeed, Jean-Claude Juncker, the current president of the European Commission, was voicing doubts.

Andrew Stroehlein, European media director for Human Rights Watch, said, “Putting migration under a portfolio named ‘protecting our European way of life’ is another example of just how much mainstream politicians in Europe are adopting the framing of the far right.”

… The hostility toward the title came as a surprise to Ms. von der Leyen, several people who discussed the matter with her during a meeting with European lawmakers later Tuesday said.

“Everyone felt that this is an exclusive and insulting thing for anyone with migration background or migrants themselves,” said Ska Keller, a member of the European Parliament and a leader of the Green group, who was among those Ms. von der Leyen met to discuss her plans for the European Commission.

… The phrase “protecting the European way of life” has long been used by representatives of the European People’s Party, the center-right grouping to which both Mr. Juncker and Ms. von der Leyen belong. It appears in a major speech Mr. Juncker made in 2016.

But Mr. Juncker used the phrase to criticize Mr. Orban and other leaders he accused of backtracking on human rights, including through the promotion of violently antimigrant rhetoric.

In other words, all that matters these days is Who? Whom?

“For me, it’s very important that the European Commission does not use the same words as the extreme right,” Ms. Delli said in a phone interview.