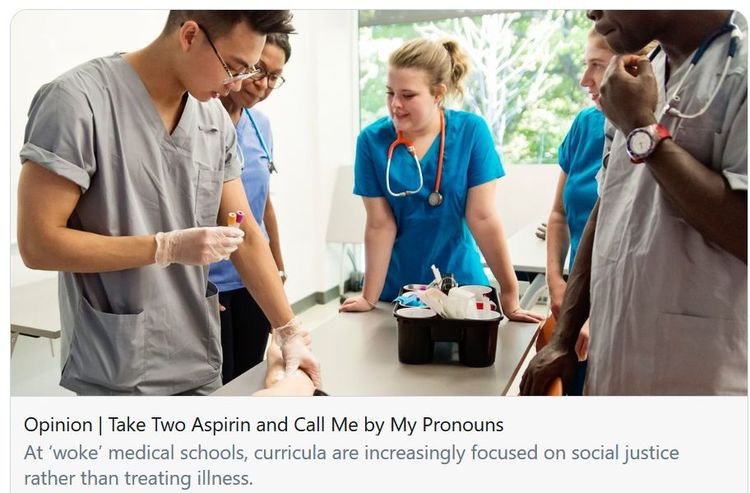 Do You Want Your Doctor to Be an Expert in Medicine or PC Social Justice Dogma?

When you go for medical treatment, would you prefer your doctors be well trained in medical knowledge and skills, or well indoctrinated in today's "Social Justice" doctrines?

According to an opinion piece in the Wall Street Journal by Stanley Goldfarb, there is a growing emphasis on politically correct social justice doctrine in today's medical schools.

That's troubling but not surprising.  Name an institution in today's America, including even the military and the churches, and these doctrines have been infiltrating and gaining strength.

The American College of Physicians says its mission is to promote the “quality and effectiveness of health care,” but it’s stepped out of its lane recently with sweeping statements on gun control. And that isn’t the only recent foray into politics by medical professionals. During my term as associate dean of curriculum at the University of Pennsylvania’s medical school, I was chastised by a faculty member for not including a program on climate change in the course of study. As the Journal reported last month, such programs are spreading across medical schools nationwide.

Take Two Aspirin and Call Me By My Pronouns, by Stanley Goldfarb, Wall Street Journal, September 12, 2019

If I go to a doctor, I'd prefer he have plenty of medical knowledge and experience.  Promoting the latest "Social Justice" fad isn't going to help him be a better doctor, and in fact it might be dangerous.

Why have medical schools become a target for inculcating social policy when the stated purpose of medical education since Hippocrates has been to develop individuals who know how to cure patients?

Yes, isn't "curing patients" the goal of the medical profession?

A new wave of educational specialists is increasingly influencing medical education. They emphasize “social justice” that relates to health care only tangentially. This approach is the result of a progressive mind-set that abhors hierarchy of any kind and the social elitism associated with the medical profession in particular.

Aren't medical schools supposed to be tough and selective?

These educators focus on eliminating health disparities and ensuring that the next generation of physicians is well-equipped to deal with cultural diversity, which are worthwhile goals. But teaching these issues is coming at the expense of rigorous training in medical science. The prospect of this “new,” politicized medical education should worry all Americans.

The traditional American model of medical training, which has been emulated around the world, emphasizes a scientific approach to treatment and subjects students to rigorous classroom instruction. Students didn’t encounter patients until they had some fundamental knowledge of disease processes and knew how to interpret symptoms. They were expected to appreciate medical advances and be able to incorporate them into their eventual fields of practice. Medical education was demanding and occasionally led to student failure, but it produced a technically proficient and responsible physician corps for the U.S.

"A technically proficient and responsible physician corps" sounds good to me.

The traditional American model first came under attack by progressive sociologists of the 1960s and ’70s, who condemned medicine as a failing enterprise because increased spending hadn’t led to breakthroughs in cancer treatment and other fields. The influential critic Ivan Illich called the medical industry an instrument of “pain, sickness, and death,” and sought to reorder the field toward an egalitarian social purpose. These ideas were long kept out of the mainstream of medical education, but the tide of recent political culture has brought them in.

As in so many other fields...

As concerns about social justice have taken over undergraduate education, graduate schools have raced to develop curricula that will steep future educators in the same ideology. Today a master’s degree in education is often what it takes to qualify for key administrative roles on medical-school faculties.

So you have people with "a master's degree in education" administering medical schools?

The zeitgeist of sociology and social work have become the driving force in medical education. The goal of today’s educators is to produce legions of primary care physicians who engage in what is termed “population health.”

This fits perfectly with the current administrator-rich, policy-heavy, form-over-function approach at every level of American education.

You can say that again!

Theories of learning with virtually no experimental basis for their impact on society and professions now prevail. Students are taught in the tradition of educational theorist Étienne Wenger, who emphasized “communal learning” rather than individual mastery of crucial information.

Where will all this lead? Medical school bureaucracies have become bloated, as they have in every other sphere of education. Curricula will increasingly focus on climate change, social inequities, gun violence, bias and other progressive causes only tangentially related to treating illness. And so will many of your doctors in coming years.

That doesn't sound good at all.

Meanwhile, oncologists, cardiologists, surgeons and other medical specialists are in short supply. The specialists who are produced must master more crucial material even though less and less of their medical-school education is devoted to basic scientific knowledge. If this country needs more gun control and climate change activists, medical schools are not the right place to produce them.

Imagine going to a doctor who can't cure you but can lecture you on climate change and gun control.