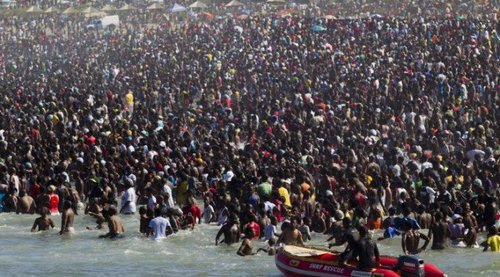 THE ECONOMIST: Free Contraception for Africa Would be a Great Investment

For a number of years now, I’ve been pointing out that the unbounded growth of population in Africa is one of the great menaces facing civilization in the 21st Century. The business press has mostly focused instead upon the economic promise of Africa’s “good demographics.” Lately, however, publications like the Wall Street Journal and now The Economist have started to wake up.

ON A trolley in a government clinic in rural Ethiopia lies Debalke Jemberu. As a medic and a nurse winkle the sperm-carrying tubes out of his testicles, he explains why he decided to have a vasectomy. He is a farmer, growing wheat, sorghum and a local staple grain called teff. But his plot is barely a quarter of a hectare. He already has four children, and has often struggled to provide for them. “I couldn’t feed more children,” he says.

… His parents had seven children, but they had eight hectares to farm. That plot has been shared among his siblings, and diminished by sales and land reforms. At the same time, he complains, the cost of living has gone up. Seven children would be far too big a family these days.

Mr Jemberu’s daughter, who is 25, is still single (he married at 19). He is happy for her to concentrate on her studies for a few more years before starting a family. And when she does, he thinks two children would be plenty.

… Alarmingly, population growth in Africa is not slowing as quickly as demographers had expected. In 2004 the UN predicted that the continent’s population would grow from a little over 900m at the time, to about 2.3 billion in 2100. At the same time it put the world’s total population in 2100 at 9.1 billion, up from 7.3 billion today. But the UN’s latest estimates, published earlier this year, have global population in 2100 at 11.2 billion—and Africa is where almost all the newly added people will be. The UN now thinks that by 2100 the continent will be home to 4.4 billion people, an increase of more than 2 billion compared with its previous estimate.

If the new projections are right, geopolitics will be turned upside-down. By the end of this century, Africa will be home to 39% of the world’s population, almost as much as Asia, and four times the share of North America and Europe put together. At present only one of the world’s ten most populous countries is in Africa: Nigeria. In 2100, the UN believes, five will be: Nigeria, Congo, Tanzania, Ethiopia and Niger.

Although much could change in the next 85 years, none of those countries is a byword for stability or prosperity. A quadrupling of their population is unlikely to improve matters. If nothing else, the number of Africans seeking a better life in Europe and other richer places is likely to increase several times over.

… But even relative to their levels of income, health and education, the countries of sub-Saharan Africa have high fertility rates. That has prompted some scholars to posit cultural explanations.

One theory is that African men want big families to enhance their status; another that communal land-holding makes them economically beneficial, since resources are shared according to family size. Without dismissing these arguments, John Bongaarts of the Population Council, an international non-profit group, suggests a third: relatively low use of modern contraception. In many places, after all, vigorous campaigns to disseminate contraceptives and discourage big families have contributed to sudden and deep falls in fertility. Such a drive in the 1970s in Matlab, a district in Bangladesh, saw the share of women using contraceptives increase six-fold in 18 months.

The African countries that have seen big falls in fertility are those, such as Burundi, Ethiopia and Senegal, with similar campaigns. In Ethiopia the fertility rate has fallen by about 0.15 a year for the past decade—blisteringly fast by demographic standards. That is probably thanks in large part to the nationwide network of 38,000 “health-extension workers”—one for every 2,500 people. Their job is to pay regular visits to each household within their locality and provide coaching on public health, from immunisations to hygiene. One of the 16 subjects in which they drill every Ethiopian is family planning. …

For the prevalence rate to keep rising, however, contraceptives must be omnipresent and cheap. Western donors have offered support here, too. At a conference in London in 2012, a group of them agreed to devote $2.6 billion to it. The Gates Foundation, the world’s biggest philanthropic organisation, promised to spend $140m a year. Since then, it claims, 24m women have gained access to contraceptives in the countries the group is targeting. It has also helped several African governments to build strong supply chains so that clinics in remote areas never run out and brought together a consortium of aid agencies that has promised to buy contraceptives in large quantities if their manufacturers lower the price. That has helped reduce the cost of contraceptive implants from about $24 a dose to about $8, says Lester Coutinho, who runs the charity’s family-planning efforts.

Alas, there is lots more to do. The UN estimates that there are still 216m married women in the world who would like access to modern methods of contraception, but do not have it. The Copenhagen Consensus, a group of academics which rates development policies, reckons it would cost $3.6 billion a year to provide what they need. The benefits, in terms of the diminished need for infrastructure and social spending, reduced pollution and so on, would be $432 billion a year—120 times more. That is the second-most productive investment the project has identified, after liberalising trade, out of a welter of different development goals. Better yet, it helps with all the others.

So, subsidizing contraception for Africans would be extremely cheap compared to the size of the bullet dodged.