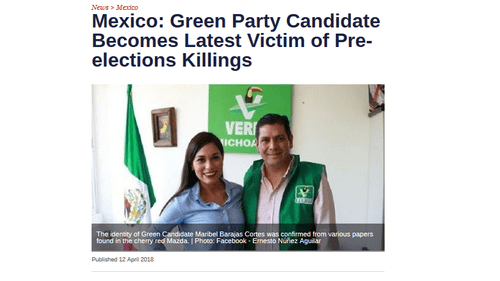 The Ecologist Green Party of Mexico: "Mexico Is a Foreign Country; They Do Things Differently There."

In most countries, the national Green Party has become a leftist identity politics party for bourgeois folks who find Communists too sweaty.

In Mexico, however, the Ecologist Green Party of Mexico, which holds a not insignificant 34 of the 500 seats in the Chamber of Deputies (not that non-Presidente power matters all that much in Mexico), is now a social conservative party that favors restoring the death penalty and dropping gay marriage.

Its opponents claim that the Ecologist Green Party is actually a well-funded front for the currently ruling PRI, but I can’t make head nor tail of current Mexican party politics, other than that everybody thinks the leftist Lopez Obrador will get elected President later this year (unless he suddenly is no longer available to run, like the PRI nominee in 1994 who got gunned down in Tijuana.)