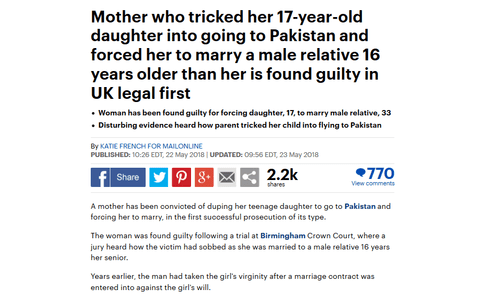 Woman has been found guilty for forcing daughter, 17, to marry male relative, 33

By Katie French For Mailonline

A mother has been convicted of duping her teenage daughter to go to Pakistan and forcing her to marry, in the first successful prosecution of its type.

The woman was found guilty following a trial at Birmingham Crown Court, where a jury heard how the victim had sobbed as she was married to a male relative 16 years her senior.

Years earlier, the man had taken the girl’s virginity after a marriage contract was entered into against the girl’s will.

The then 13-year-old had to undergo an abortion on returning to the UK, with her GP reporting his concerns to social services. …

Judge Patrick Thomas QC told the jury the adjournment was appropriate as the case was ‘entirely novel’, with no other relevant case law to rely upon.

After all, there were practically no Pakistanis in England practicing enforced cousin marriage for immigration fraud purposes until, what, a mere 55 years ago? So how was anybody supposed to know this kind of thing was going on? These days, British broadsheets and the BBC mostly seem to cover immigration issues in terms of the docking of the Windrush in 1948, so they can hardly be expected to have noticed anything happening post-Clement Attlee.