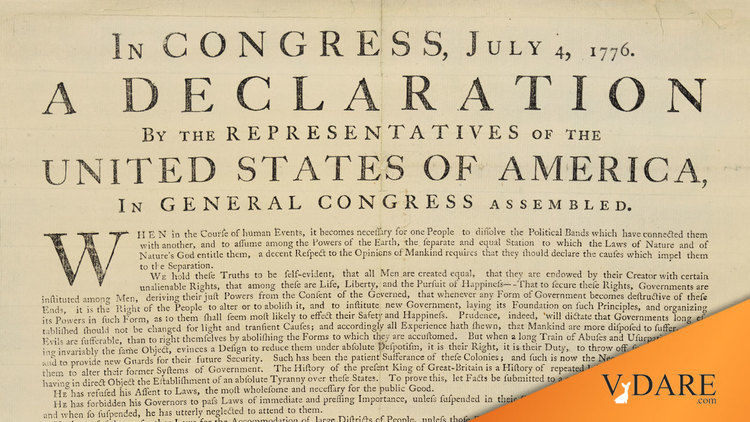 The Decline Of Capitalization

Why does the Declaration of Independence have so many, but also so irregularly, capitalized words? For instance, why is the bland word “Course” capitalized but not the weighty-sounding “human events”?

From an article by Jon Lackman in Slate:

In the century prior to 1765, nouns were generally capitalized. (The reason for this is now obscure; Benjamin Franklin hypothesized that earlier writers “imitated our Mother Tongue, the German.”) By the Revolutionary War era, however, chaos was the rule. Everyone, it seems, had a different style, and individual authors vacillated from one sentence to the next. …

My guess would be that lots of capitals look heavy-handed, which was out of fashion during the Enlightenment (which is capitalized, of course).

Other founders, including Jefferson and Madison, dropped caps with reckless abandon.

But the scribes who wrote up the formal version from Jefferson’s draft liked a lot of capitals.

… In America, Franklin attributed the change to printers who felt that light capitalization “shows the Character to greater Advantage; those Letters prominent above the line disturbing its even regular Appearance.” Author Thomas Dyche wrote in 1707 that capitalizing all nouns is “unnecessary, and hinders that remarkable Distinction intended by the Capitals.” As you can see, Dyche couldn’t convince his publishing house to change its ways, even for his own book.

I’m guessing that heavy capitalization started to seem heavy-handed during the 18th century, an era when lightness of touch—What Would Voltaire Say?—was prized.

Eventually, heavy capitalization faded in the English-speaking world. But then German philosophy became fashionable from the 1830s with people like Coleridge and Emerson. Some German concepts sounded more profound in German so they were often left untranslated. The Germans still capitalized each noun and American students tended to bring over the capital with the noun: e.g., “Zeitgeist” rather than “zeitgeist” for “spirit of the age.”

My vague recollection is that 50 years ago, William F. Buckley enjoyed satirizing the pompous spirit of his age by spelling it “the Zeitgeist.” I carry on that affectation when I write about “the Woke” although I doubt if many readers get my obscure humor.