The Conspiracy To Aid Illegal Aliens: DHS And California Agree On Licenses For Illegals

Aiding and Abetting illegal aliens is a criminal violation of Federal law, to wit Title 8 United States Code (USC) Section 1324, Bringing In and Harboring Certain Aliens.  This conspiracy, a violation also of Title 18 USC 371, Conspiracy, between Federal and State governments is highlighted by the recent agreement and approval by DHS of the driver's license and identification cards that California will be issuing to illegal aliens soon.  A conspiracy under Federal law is defined as 1) an agreement to commit a crime 2) between 2 or more persons, and 3) an overt act in furtherance of the unlawful act.

The Department of Homeland Security (DHS) has approved the design of driver's licenses for illegal immigrants in California. DHS had previously rejected an earlier design (pictured above) because it was not sufficiently distinctive from regular driver's licenses.

According to the Sacramento Bee, DHS sent a letter to Department of Motor Vehicles director Jean Shiomoto on September 17 informing them of their approval.

"DHS commends California's efforts to improve the security of its licenses and identification cards and looks forward to continuing to work with you on this matter," the letter read.

So, instead of informing California that it was in violation of Title 8 USC 1324, DHS conspired with California to violate the statute.  Sounds like racketeering to me. Anyone know a good lawyer to file a RICO lawsuit against Governor Moonbeam, Director Shiomoto, Barack Hussein Obama, and Jeh Johnson? 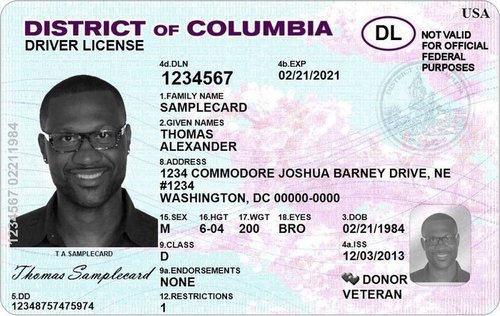 If Mr. Samplecard is in the country legally, why did he get a license that says "“Not valid for official federal purposes.”"?

And just a warning to illegals, the next administration might use that information to come arrest you.

Nothing says reasonable suspicion to detain you like an identification card issued to specifically illegal aliens, which leads to the probable cause to clamp on las esposas.  Just a warning.

Hopefully the Cruz Administration will also arrest Moonbeam, Shiomoto, Johnson, and Obama as the statute of limitations is 5 years.