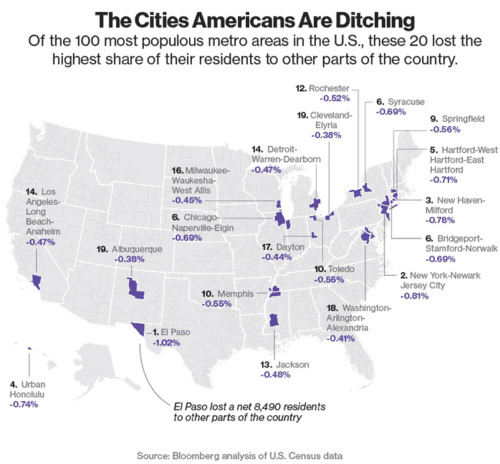 "The Cities Americans Are Ditching"...Are The Ones With The Most Immigration

These Are the Top 20 Cities Americans Are Ditching

Some of these cities are just Rust Belt cities in long-term decline, but the others are more interesting:

New York City, Los Angeles, Honolulu: They’re all places you would think would be popular destinations for Americans. So it might come as a surprise that these are among the cities U.S. residents are fleeing in droves.

The map below shows the 20 metropolitan areas that lost the greatest share of local people to other parts of the country between July 2013 and July 2014, according to a Bloomberg News analysis of U.S. Census Bureau data. …

Interestingly, these are also the cities with some of the highest net inflows of people from outside the country. That gives many of these cities a steadily growing population, despite the net exodus of people moving within the U.S.

So what’s going on here? Michael Stoll, a professor of public policy and urban planning at the University of California Los Angeles, has an idea. Soaring home prices are pushing local residents out and scaring away potential new ones from other parts of the country, he said. (Everyone knows how unaffordable the Manhattan area has become.)

And as Americans leave, people from abroad move in to these bustling cities to fill the vacant low-skilled jobs. They are able to do so by living in what Stoll calls “creative housing arrangements” in which they pack six to eight individuals, or two to four families, into one apartment or home. It’s an arrangement that most Americans just aren’t willing to pursue, and even many immigrants decide it’s not for them as time goes by, he said.

This has both a short-term (sojourners) and long-term (clannish cultures) aspect, as I noted in my 2010 review in VDARE of Tory cabinet minister David Willetts’ book The Pinch:

Willetts nicely lays out one reason why the Blair-Brown Bubble in London did so little to alleviate unemployment among young Englishmen in blue collar cities like Liverpool (just as the Bush Bubble in Las Vegas didn’t help American workers in Cleveland, as I pointed out in VDARE.com on July 7, 2006). He writes: “Quite simply, high house prices were one factor sucking in immigrants.”

Willetts observes, “The young man from Liverpool does not see why he should live in more cramped conditions than his family back in Liverpool occupy.” In contrast, the immigrant crams into a house with many others from his country. “His willingness to be under-housed gives him a labour market advantage and it is greater if house prices are higher.” In turn, sucking in immigrants creates a vicious cycle, driving up housing prices, which drives out more natives.

“So it is not that our Liverpudlian is somehow a bad person compared to our Pole. It is that he or she cannot capture similar benefits for their family by under-housing themselves in London.”

“The crucial proposition therefore underlying the economics of immigration in Britain is as follows. The larger the proportion of earnings consumed by housing costs, the greater the benefits of under-housing and the greater the price advantage of immigrant labour. It was not despite the high cost of housing that immigrants came to the house price hotspots in Britain to make a living—it was because of them.”

But, of course, a lot of immigrants who initially assume they’ll just be sojourning in America so they can send home remittances before they make their triumphant return wind up staying here and bringing over their extended families to live with them, crowding out Americans. As I explained:

The [Anglo-American-style] nuclear family is expensive. Each small family wants its own place to live—ideally, a house with a garden. Not surprisingly, the crowded British Isles were long the emigration capital of the world, as people headed out for the emptier lands of America, Canada, Australia, and New Zealand.

Why don’t Anglo-Saxons like to live in large, noisy My Big Fat Greek Wedding-style homes? Unfortunately, Willetts doesn’t address this. Personally, I don't see much evidence that people from other cultures get along better with their relatives. They just don’t seem to mind screaming at their cousin-in-laws as much as Anglos would mind. …

This relative lack of nepotism and ethnocentrism makes Anglos simultaneously both successful and at risk of being out-maneuvered by less idealistic groups.

The need for a separate home for each nuclear family can put Anglo-derived cultures at a disadvantage in newly cosmopolitan cities. For example, Los Angeles, strange as it may seem now, was largely built in the 20th Century by civil people from rather bland, trusting places such as Iowa, Illinois (where my father is from) and Minnesota (where my late mother grew up).

This causes them and their descendents problems today, in a very expensive city increasingly dominated by newcomers from the more vibrant cultures of the ex-Soviet Union and the Middle East who don’t as much mind crowding in with their in-laws and cutting corners on their taxes.

El Paso, Texas, the city that residents fled from at the fastest pace, also saw a surprisingly small number of foreigners settling in given how close it is to Mexico.

“A lot of young, reasonably educated people are having a hard time finding work there,” Stoll said. “They’re not staying in town after they graduate,” leaving for the faster-growing economies of neighboring metro areas like Dallas and Austin, he said.

This is part of a general pattern that highly Mexican areas in America wind up being too economically stagnant to attract more Mexicans: it’s also seen in the Rio Grande Valley and in New Mexico. And some of Connecticut’s problems are due to Puerto Rican areas having stopped attracting Puerto Ricans.