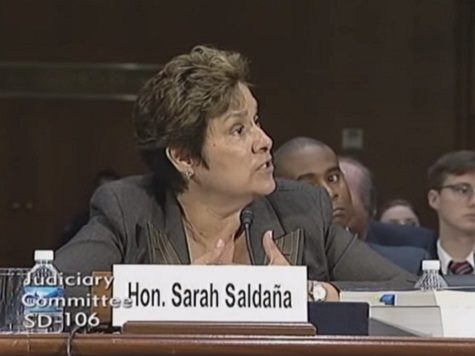 Obama ICE Director (Not For The First Time) No Immigration Enforcement until Amnesty Is Passed,

Breitbart (normally a fine news source) seemed surprised that a dim administration apparatchik, ICE Director Sarah Saldana, recently remarked during a hearing that an amnesty for millions of foreign lawbreakers was the price required for any kind of immigration enforcement.

Below, during an April hearing, ICE Director Saldana shows the standard index card list of who may be deported that is handed out to agents. 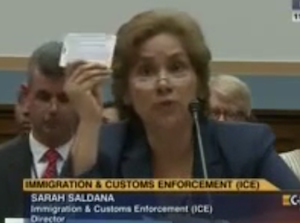 Actually the devil’s bargain of no enforcement is the same old lawless crap and not new at all. In 2010 then-Senator Jon Kyl (R-AZ) noted at a local town hall that during a private meeting with the President, Obama had said that precise thing:

KYL: “The problem is, he (Obama) said, if we secure the border, then you all won’t have any reason to support comprehensive immigration reform.”

Fortunately, the video of that statement still resides on the internets:

Plus, the appearance of the video kicked up a minor kerfuffle at the time, complete with denials from the palace:

The White House on Monday denied Arizona Sen. Jon Kyl’s claim that President Barack Obama told him privately that he would not work to secure the border unless it was part of a comprehensive immigration reform package.

In a video that started circulating among conservative blogs over the weekend, the Arizona Republican is seen telling supporters in North Phoenix that in a private meeting in the Oval Office, Obama said “the problem” with border enforcement measures is that “if we secure the border then [Republicans] won’t have any reason to support comprehensive immigration reform.” [. . .]

Still, the statement of Sarah Saldana fits Michael Kinsley’s definition of a political gaffe, namely an instance where an official reveals a true fact that is inconvenient.

Sen. David Vitter (R-LA) repeatedly pressed Saldaña on why the Administration was taking no action against sanctuary jurisdictions that refuse to turn over dangerous criminal aliens from their prisons and jails to federal law officers. Saldaña replied that Congress would first have to pass “comprehensive immigration reform.”

Vitter: “This has been going on for years and you still are not prepared to say that there is ever going to be any negative consequence to those [sanctuary] jurisdictions. When is that going to change?”

Saldaña: “I presume when you all address comprehensive immigration reform; perhaps it can be addressed there.” [. . .]