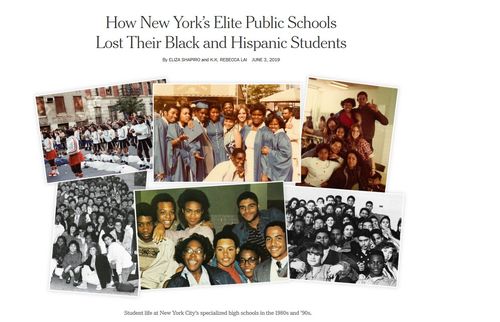 The mayor’s proposal would replace the exam — currently the sole means of gaining admission to the schools — with a system that offers seats to the top-performing students from every city middle school. If his plan is approved by the State Legislature — an increasingly dim possibility — the specialized schools would be nearly 50 percent black and Hispanic, and Asian students would lose about half their seats.

That would be a significant blow to the Asian students, most of them poor, who have replaced white students as a majority in the specialized schools. From 1970 to 2011, the number of Asia-born immigrants living in New York City increased about eightfold to 843,000 from 105,000. The Asian population of the specialized schools includes Asian-Americans and Asian immigrants.

It’s almost as if the Current Year’s obsession with White Racism in the increasingly distant past is not good preparation for understanding the issues of the near future.

It’s almost as if denying average differences in intelligence and culture among the major racial groups isn’t good prep for dealing with emerging challenges.