The Catholic League And The War On Christmas—They Didn't Start The Resistance, But Neither Did We

Bill Donohue of the Catholic League does sterling work on War on Christmas resistance every year, and was certainly certainly at it well before Bill O’Reilly took it up in 2005, but he’s neither the man who started the War on Christmas, as ReligionDispatches suggests (the "War On Christmas" is what the ACLU fights) nor the first person to resist it, as you might think from this tweet:

Patricia Miller is no fan of Bill Donohue. But what she says accurately credits him with starting the fight against the "War on Christmas." This is important because for years Bill O'Reilly has falsely credited himself with starting the backlash. https://t.co/AoMIOclM0K

The article does show him having priority over O'Reilly:

Beginning around 2000, Donohue began complaining about the secularization of Christmas and the “extent to which Christmas is being downplayed in the nation’s public schools.” By 2003, he was regularly claiming that schools were “censoring Christmas” when they erected holiday displays that acknowledged cultural traditions other than Christianity or banned crèches or sang Frosty the Snowman instead of Silent Night. In 2004, he gave examples of besieged Christians organizing to defend Christmas by singing banned Christmas carols and fighting municipalities to display crèches in public spaces. 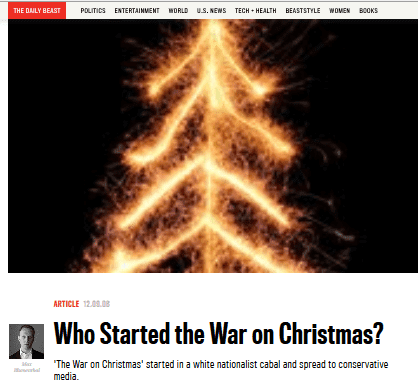 But of course, Peter Brimelow and John O'Sullivan were fighting against this in the 90s, in the pre-Purge National Review,  and gets blamed for starting the War On Christmas by people like Max Blumenthal, who said in 2008 that the whole thing had been started by "white nationalists."

But of course, as I wrote a while back, it goes back farther than that–William F. Buckley editorialized about the same phenomenon in NR in 1957. [Krismas, PDF]

Lawyer Jordan Lorence of the Alliance Defending Freedom wrote about the history of it in 2016.

Lorence, who had been fighting the War On Christmas on the side of the angels since the Reagan Administration, wrote:

The New York Times recently published an article purporting to trace the history of the “War on Christmas.”  The article concludes that “there is no evidence of an organized attack on Christmas in the United States,” and expressed skepticism about the “alleged liberal antagonism toward the holiday.”

As the author would tell it, Fox News host Bill O’Reilly stirred up the passions of his viewers based on a book written in 2005 by another Fox News host, John Gibson, entitled “The War on Christmas.”

John Gibson interviewed me for that book, and I detailed the legal battles I and others had fought against Christmas censorship from the mid-1980s.  I even wrote a book in 1987 on the topic that detailed ongoing efforts to suppress celebrating or observing the religious aspects of Christmas – the birth of Jesus Christ.

I can confidently say that the “War on Christmas” was not concocted by people at Fox News in 2005. It really happened. I know because I was there.

Controversies | Three reasons why the New York Times’ War on Christmas denial is all wrong,  FoxNews.com, December 22, 2016. (Links in original).

Lorence wrote on the same subject in 2011, and I blogged on it under the heading “I Feel Like Neil Armstrong Listening To Someone Argue That NASA Faked My Apollo Moon Landing!”, adding that both as a Christian, and as a lawyer, he's obliged to react like Neil Armstrong, not like Buzz Aldrin—seen here punching one of those guys who believes the moon landing was faked.