The Bahamas Detains and Deports Illegal Immigrants - Why Can't We? 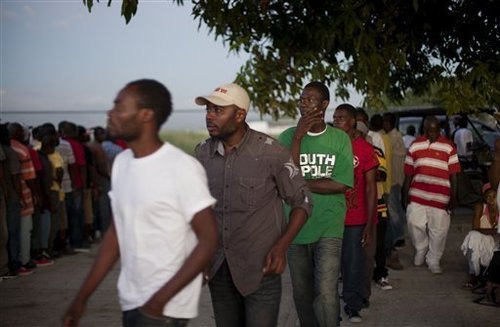 The Bahamas is an archipelago-nation located southeast of Florida and northeast of Cuba (see map here).   The majority of its population is black, its official language is English, and its GDP per capita is one of the highest in  the Western Hemisphere.

The Bahamas, like the United States, has an illegal immigration problem.   Unlike our government, which rewards illegal aliens and gives them priority over American citizens, The Bahamas' government is detaining and deporting illegal aliens.   From The Fresno Bee:

On the first day new immigration rules took effect this month in the Bahamas, officers in green fatigues swept through poor sections of the capital filling two yellow school buses with dozens of people who couldn't document their right to be in the island chain.

The government, amid fierce criticism of the raid, later insisted the timing of the operation was coincidence. Still, the message of the surprise morning raid, in which the officers were accompanied by local media, couldn't be clearer: The Bahamas aims to become less hospitable to its swelling population of migrants lacking legal status. [Bahamas fends off critics over new migrant rules , By  Ava Turnquest and Ben Fox, AP, November 27, 2014]

Can you imagine that?  "A surprise morning raid in which the officers were accompanied by local media..."  I love it!

"The fact is that illegal migration is a huge problem for us," Foreign Minister Fred Mitchell said in a recent interview. "We spend enormous resources for it. It is a drain on our social services, health care and education and we need to get the matter under control."

We need folks like Fred Mitchell in the U.S. government.

The island chain of about 360,000 has a foreign-born population of more than 18 percent, according to an official report released last month. While the precise number of those who migrated illegally is unclear, the islands long have drawn migrants sailing from nearby Haiti. Census figures from 2010 show more than one out of 10 people in the Bahamas is Haitian, up from 3.6 percent in 1970.

Mitchell said haphazard enforcement of existing laws has put too many people in legal limbo and has made the Bahamas a magnet for migrants, arriving often in dangerously overloaded smuggling vessels.

Of course there are critics.

But the manner in which the Bahamas is carrying out this tightening of its borders is coming under criticism from human rights activists, who complain of arbitrary and heavy-handed enforcement that is sparking fear in the shantytowns where many migrants live.

Fear?  Obviously those who have fear are the illegal aliens themselves.

"People are afraid to go to work," said Annette Martinez, a human rights lawyer documenting the situation with local activists. "They say 'We are afraid because at any moment the immigration officers will come or their bosses will identify them as foreigners.'"

Can you imagine that in the United States?

Martinez also said conditions at the detention center where migrants are held are "appalling," with heavy crowding and poor access to adequate food, sanitation or medical care.

Martinez [Email her] is from Puerto Rico, and is thus an American citizen.

The government says it's working to reduce the population in the detention center and sent two planeloads of migrants to Haiti on Wednesday. "In the Bahamas, they treat Haitians like dogs," Youtchike Dormeus, an 18-year-old deportee, said as she got off the plane in Port-au-Prince. The country, which denies treating anyone inhumanely, has deported 3,000 people this year.

So Youtchike, why'd you go there then?

Under the new rules that took effect Nov. 1, everyone must have the passport of their nationality and, if they are not a Bahamian, a valid residency or work stamp. In addition, the government is tightening the process for employers to receive work permits for non-Bahamians and requiring first-time applicants for residency permits to apply in their home countries.

Mitchell says the Bahamas briefed Haiti's government before the new rules took affect and was assured it could provide the passports and other documents needed by Haitians. He has defended the new policies in blunt terms. "You can't just jump off a boat with your wet feet and come into the immigration department and apply for a work permit," he told Parliament.

The new rules may be particularly tricky for people who were born in the Bahamas to people who migrated illegally. While the constitution allowed them to apply for Bahamian citizenship, many did not.  [Notice it's not automatic, as in the United States.]  Now, before they can seek legal status — a process that has no guaranteed outcome — they first will need to obtain passports from "home countries" they may never have seen. A similar situation has been playing out in the Dominican Republic, which borders Haiti and is attempting to regulate a much larger population of people lacking legal status.

Heleen Gelin, a 25-year-old Bahamian-born Haitian, has submitted her application for citizenship but says it has been a difficult process, with immigration officials giving conflicting information and she doesn't know if she will secure legal residency.

"I don't have anything right now," said Gelin, whose two children also lack legal status. [And the kids's dad, where's he and what's his status?]

Many without papers are too fearful to speak out against the changes, afraid they will be marked for deportation.

Whereas here in the United States Banana Republic, illegals march in the streets demanding amnesty.

Martinez, director of the Human Rights Clinic at the Interamerican University of Puerto Rico School of Law, said the local activists with whom she conducts interviews did not want to be identified because of potential reprisals.

The situation in the Bahamas has brought condemnation from Amnesty International and the Robert F. Kennedy Center for Justice and Human Rights. Daphne Campbell, a Florida state representative of Haitian descent, has called for a boycott of the Bahamas.

Boycott The Bahamas because they're defending their own nation?   Notice too that Representative Campbell, being of Haitian descent, is bringing her relatives' grudge against The Bahamas into our politics.

Of course they are.  The Bahamians see their own government is sticking up for them.   Why can't Americans have that?

"It's becoming a national security issue for us and for our neighbors and we have to do something about it," Mitchell said.

Carry on, Mr. Mitchell, spoken as a true Bahamian patriot.   How can we get people like you in our government?

Click the Fresno Bee article and you can see more photos of the Bahamian deportations.