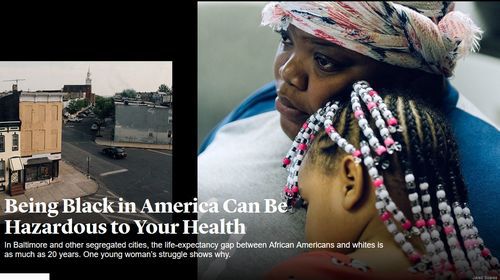 THE ATLANTIC: We Need Ethnic Cleansing Now of Blacks from Gentrifiable Waterfront Cities ... to Fight "Segregation," of Course

A giant article in The Atlantic compiles every imaginable cliche about why Baltimore being the way it is is Your Fault.

Being Black in America Can Be Hazardous to Your Health

In Baltimore and other segregated cities, the life-expectancy gap between African Americans and whites is as much as 20 years. One young woman’s struggle shows why.

In The Atlantic, the problems of inner city blacks are always due to “segregation;” the implied solution is always for the government to subsidize sending them to to remote white suburbs and towns, coincidentally opening up the inner cities for white gentrifiers, such as, say, Atlantic staffers.

I’ve been saying this for decades, so I doubt if it will ever get through, but it’s obvious that poor inner city blacks are the American real estate market’s biggest hot potato. So, there is a multi-trillion dollar incentive for urban whites to believe, conveniently but no doubt quite sincerely by now, that Science has Proven that there are Reasons why the government is morally obligated to dump this hot potato in the laps of non-urban whites, those disgusting racists.

It’s an astonishing article; as you say, it reveals so much.

If you read carefully, what’s most striking is that although Kiarra is being held up as a consummate victim, she’s already had so much help in her life that it’s hard to keep a tally:

***The article mentions that she’s got health insurance, which gives or has given her access to wide-ranging health care, including psychiatric hospitalization, weekly sessions with a psychotherapist, weight-loss coaching, rehab for booze, and a carefully-managed opportunity for gastric-sleeve surgery, in addition to her regular medical visits for her incipient diabetes. She also mentions she has yet to be given a device to manage her fat-induced sleep apnea that she had been ‘promised’.

***She’s had uncounted (literally) opportunities to get a college degree; she’s dropped out of ‘one local college after another’. She also enrols in a medical assistant training program she seems to abandon.

***She held more than one ‘solid job’ that she quit because it didn’t rise to her ‘ceiling’, which is to be an ‘important person’. At the time of writing, she holds a job that’s poo-pooed for its low pay, but she’s still got enough money for lots of fast food.

***The article alludes to her receiving food stamps, and getting subsidized housing through her rehab program.

The purpose of this article is to explain how all of this help and all of these opportunities are Not Enough. There is so much more savioring yet to be done.