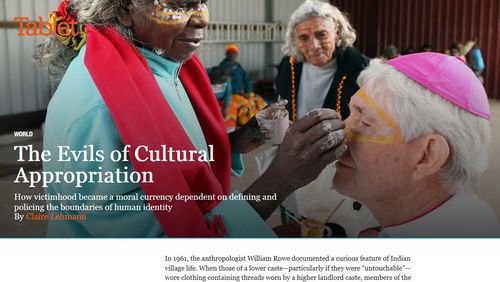 Lehmann, editor of Quillette, finds the to-do over cultural appropriation to be fairly baffling.

But I think it’s more understandable as resentment that you don’t get a check in the mail for use of your group’s intellectual property rights.

Congress treats the heirs of individual creators very nicely: while F. Scott Fitzgerald’s 1925 novel The Great Gatsby is in the public domain in some Anglosphere countries, but won’t be in the U.S. until the end of 2020, after 95 years. (Here’s an article about Fitzgerald’s granddaughter, who seems to have been able to afford a rather complicated life from royalties from schoolteachers assigning Gatsby to their classes.)

But a lot of other things, such as musical styles, cuisines, modes of dressing, tend to be more the joint product of cultures more than identifiable individuals.

An economic system in which everybody had to financially compensate everybody else all the time for cultural appropriation would probably turn out to be a good deal mostly for accountants and IP lawyers. But it’s not surprising lots of people these days kind of dream about it and feel entitled to resent others for not offering them mailbox money.