Behind the Internet’s Anti-Democracy Movement

White House chief strategist Steve Bannon is reportedly a reader of neoreactionary political theory. A tour through the pro-authoritarian philosophy gaining visibility on the right.

White House chief strategist Steve Bannon has been in contact via intermediaries with Curtis Yarvin, Politico Magazine reported this week. Yarvin, a software engineer and blogger, writes under the name Mencius Moldbug. His anti-egalitarian arguments have formed the basis for a movement called “neoreaction.” …

For a group of people whose writings tend towards the verbose, neoreactionaries don’t show much interest in talking to reporters. Yarvin declined to cooperate when I reached out to ask about his alleged contact with Bannon, instead choosing to try to troll me into believing a Twitter user called @BronzeAgePerv is his contact with the White House.

“Think you should speak directly to my WH cutout / cell leader,” Yarvin said in an email. “I’ve never met him and don’t know his identity, we just DM on Twitter. He’s said to be ‘very close’ to Bannon. There are several levels, but most people just start out with his public persona.” @BronzeAgePerv’s avatar is of a muscular, shirtless man and his account’s biography reads: “Steppe barbarian. Nationalist, Fascist, Nudist Bodybuilder! Purification of world. Revolt of the damned. Destruction of the cities!”

“I know nothing about BAP personally, except that he lifts. DM him. He may not give you any info but he always responds,” Yarvin said. “Apparently there’s a big underground movement of right-wing bodybuilders — thousands. Their plan is to surface spectacularly this April, in a choreographed flash demo on the Mall. They’ll be totally nude, but wearing MAGA hats. Goal is to intimidate Congress with pure masculine show of youth, energy. Trump is said to know, will coordinate with powerful EOs…” 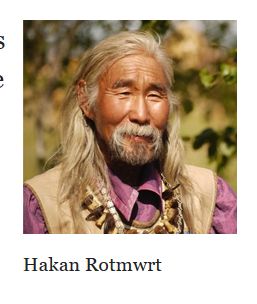 Personally, unlike Mencius — that neoreactionary arriviste with his unsound, untested Bronze Age affectations — I don’t waste my time communicating with a low-level player like Bannon.

I prefer to go right to the top.

So I issue my orders directly to President Trump through our agreed-upon go-between, new West Wing staffer Hakan Rotmwrt.

Hakan (a.k.a. Hakon) is an Ainu-American paleoreactionary activist dedicated to returning the planet to the time-tested verities of the New Stone Age.

He’s a moderate, not one of those Old Stone Age extremists, like the dozen or so OSA Brotherhood members who have secretly infiltrated Puzder’s staff.

We’re working together on some of the new Administration’s highest priority projects, such as an Executive Order to temporarily:

Our plans are modeled upon Bill Kristol’s and Robert Kagan’s 1997 Project for a New American Century agenda for installing Ahmad Chalabi as president of Iraq, so you can be sure we’re not just some wackos spitballing this.