The Amount Of Immigration Patriotism In Donald Trump’s Speech Is Amazing!

The amount of immigration patriotism in Donald Trump’s speech is amazing. I’ve selected a couple of sections and added emphases, but you should probably read and watch the whole thing. (Quotations below are from the Politico version of the speech as prepared.)The take from MSNBC's Chris Hayes:

The number of new illegal immigrant families who have crossed the border so far this year already exceeds the entire total from 2015. They are being released by the tens of thousands into our communities with no regard for the impact on public safety or resources.

One such border-crosser was released and made his way to Nebraska. There, he ended the life of an innocent young girl named Sarah Root. She was 21 years-old, and was killed the day after graduating from college with a 4.0 Grade Point Average. Her killer was then released a second time, and he is now a fugitive from the law.

I’ve met Sarah’s beautiful family. But to this Administration, their amazing daughter was just one more American life that wasn’t worth protecting. One more child to sacrifice on the altar of open borders.

Trump’s reference of the Sara Root killing has the Five Fast Facts people at Heavy.com actually including immigration status as a “Fast Fact”: 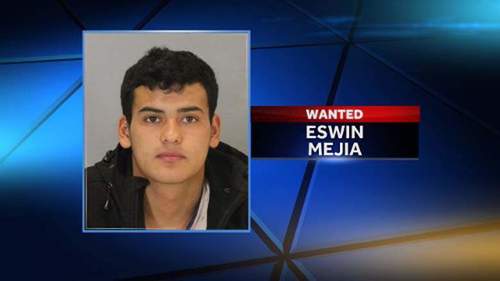 The fifth fact is that the Judge who let Mejia go is scumbag. However,for the record, he’s an Italian-American scumbag, not a Mexican.

My plan will begin with safety at home – which means safe neighborhoods, secure borders, and protection from terrorism. There can be no prosperity without law and order. On the economy, I will outline reforms to add millions of new jobs and trillions in new wealth that can be used to rebuild America.

A number of these reforms that I will outline tonight will be opposed by some of our nation’s most powerful special interests. That is because these interests have rigged our political and economic system for their exclusive benefit.

Big business, elite media and major donors are lining up behind the campaign of my opponent because they know she will keep our rigged system in place. They are throwing money at her because they have total control over everything she does. She is their puppet, and they pull the strings.

This is great, and he not only talks about illegal immigration, but the negative effects of legal immigration—a thing that has been known to cause neoconservatives to turn purple with rage.

My opponent has called for a radical 550% increase in Syrian refugees on top of existing massive refugee flows coming into our country under President Obama. She proposes this despite the fact that there’s no way to screen these refugees in order to find out who they are or where they come from. I only want to admit individuals into our country who will support our values and love our people.

Anyone who endorses violence, hatred or oppression is not welcome in our country and never will be.

Decades of record immigration have produced lower wages and higher unemployment for our citizens, especially for African-American and Latino workers. We are going to have an immigration system that works, but one that works for the American people.

By ending catch-and-release on the border, we will stop the cycle of human smuggling and violence. Illegal border crossings will go down. Peace will be restored. By enforcing the rules for the millions who overstay their visas, our laws will finally receive the respect they deserve.

Tonight, I want every American whose demands for immigration security have been denied – and every politician who has denied them – to listen very closely to the words I am about to say.

On January 21st of 2017, the day after I take the oath of office, Americans will finally wake up in a country where the laws of the United States are enforced. We are going to be considerate and compassionate to everyone.

But my greatest compassion will be for our own struggling citizens. My plan is the exact opposite of the radical and dangerous immigration policy of Hillary Clinton. Americans want relief from uncontrolled immigration. Communities want relief.

Yet Hillary Clinton is proposing mass amnesty, mass immigration, and mass lawlessness. Her plan will overwhelm your schools and hospitals, further reduce your jobs and wages, and make it harder for recent immigrants to escape from poverty.

I have a different vision for our workers.