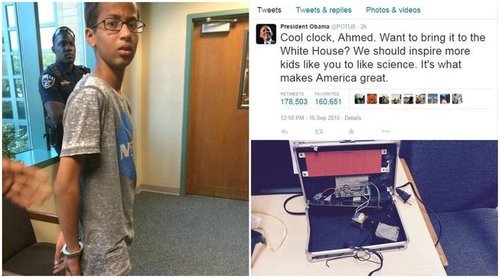 I’m sure you’ve heard about the Sudanese Muslim immigrant kid in Texas who was arrested for bringing his home made electronic clock to school where Islamophobes worried that it was a time bomb beeping in his backpack. The President bestirred himself from his narcissistic reveries to note that the northeast African looked a lot like him at that age and invited him to the White House, much to the satisfaction of Salon readers.

But a reader points out that the kid’s dad is a publicity hound who routinely returns to Sudan to run for President and engages in other PR stunts like debating the Rev. Terry Jones over the holiness of the Koran. From the Dallas News:

“He just wants to invent good things for mankind,” said Ahmed’s father, Mohamed Elhassan Mohamed, who immigrated from Sudan and occasionally returns there to run for president. “But because his name is Mohamed and because of Sept. 11, I think my son got mistreated.”

Mohamed is familiar with anti-Islamic politics. He once made national headlines for debating a Florida pastor who burned a Quran.