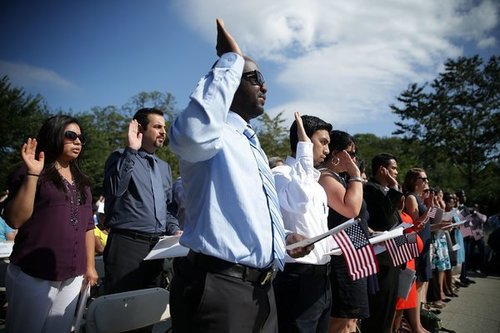 The GOP Establishment is twisting itself into pretzels trying to appeal to swing voters, and women, and minorities, and everyone else who the consultants say they "need" to win.

White House officials announced the start of a nationwide campaign on Thursday to encourage legal immigrants to become American citizens, which could add millions of voters to the electorate in time for the presidential election next year.

With about 8.8 million legal residents in the country who are eligible to become citizens, White House officials said they were trying to make it easier to complete the final steps to citizenship. The United States Citizenship and Immigration Services, the federal agency in charge of naturalizations, will offer practice tests on cellphones for the civics exam that immigrants must pass, but which many find daunting, and will hold preparatory workshops in rural areas. Applicants will also be able to pay the fee — still a hefty $680 — with a credit card.

The White House is working with regional immigrant groups to organize more than 70 citizenship workshops and about 200 naturalization ceremonies in the coming week alone...

The campaign, which includes a blitz of television ads with a welcoming message for immigrants, gives President Obama a chance to set up a contrast with Republicans vying to succeed him. In the Republican debateon Wednesday night, Donald J. Trump, the real estate magnate who has been leading the polls among the Republican candidates, returned to his hard-line proposals that include building a wall along the length of the Southern border.

What's surprising about this is how the Times admits right off the bat that this is a politically driven policy. This is simply ballot stuffing, pure and simple. And what will the GOP (sans Trump) do in response? Offer them tax cuts? Mutter platitudes about freedom and democracy? Talk about Ronald Reagan?

Again, in the context of the #NRORevolt, one point has to be made clear again and again. The so called far right has been exactly right about the consequences of mass immigration up to this point. This is electing a new people, pure and simple. Conservatism Inc. may not want to hear it. But American politics will increasingly resemble nothing more than a racial head count.