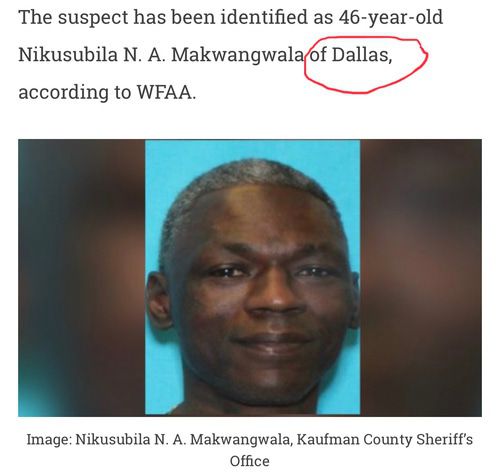 Texas Woman Shoots "Dallas Man" Named Nikusubila N. A. Makwangwala After He Kicks In The Door To Her House 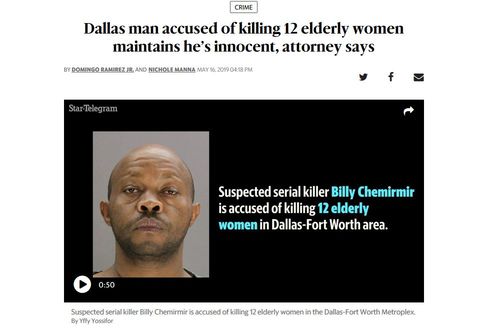 Here's a description of Kenyan Billy Chemirmir's modus operandi from someone who survived the experience:

She described how a well-dressed man had knocked on her door, claiming to be a maintenance worker. When she responded that she did not require any work done, he forced his way inside and "knocked her from her walker to the floor", as reported by Dallas News.

BizPacReview describes an attack on another Texas woman, but this woman had a gun, so while she survived the experience, the attacker didn't:

She reportedly woke up after hearing a man banging on her door, according to the Kaufman County Sheriff’s Department. After investigating the noise, she determined she didn’t recognize the man, deciding not to answer him, CBS DFW reported.

She said she heard the man kick in the back door of her house, prompting her to lock herself in her closet and call 911 at about 9:45 a.m., according to WFAA.

She was still on the phone with the 911 operator when the man allegedly entered the house and confronted her in the closet. She then reportedly shot the man in self-defense, killing him, according to local authorities.

The suspect has been identified as 46-year-old Nikusubila N. A. Makwangwala of Dallas, according to WFAA. The Kaufman County Sheriff’s Department has acknowledged the woman was defending herself from an intruder in her home, and there are expected to be no charges.

A woman in a neighboring home, Amanda Baber, said she was still shaking when she talked to CBS DFW.

“I seriously still can’t believe that this happened. And I heard this morning the helicopters roaring around and I thought it was a little but weird. But the fact that you told me it happened so close to here, I mean it’s kind of crazy, feels so country, and it’s pretty much the reason we moved here,” she said.

Baber also said she was happy her neighbor was able to defend herself in that situation.

Texas woman shoots and kills home invader: ‘Praise God she had the means to protect herself’, BPR Wire, May 25, 2019

Now there are two problems here: one is that Texas is getting immigrants from terrible African countries. (Makwangwala is Malawian name. Malawi may be described as a hellhole, if you're polite.)

The other point is they keep being called "Dallas Man", which leads to ignorance on the part of the public. "False consciousness", they call it.

On the first point, note that Ebola came to American in 2014 as a result of a Liberian with relatives in Dallas.

It turns out that there's a Liberian Community Association of Dallas, which spent a lot of time worrying about "backlash" during the Ebola incident. Who thought that was a good idea?

On the second point, I've been writing about this for years, a big piece on it can be seen in my Fulford File called “Not Reporting Race”—MSM Promoting False Consciousness About Race And Crime, With Help From Cathy Young.

If this had happened in a gun-controlled area, of course, the victim would be dead—and the public would still be uninformed about the real issue.