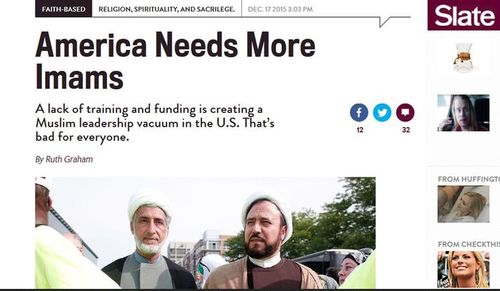 But now Slate has a counterproposal: pay imams more money.

A lack of training and funding is creating a Muslim leadership vacuum in the U.S. That’s bad for everyone.

One of many ugly patterns since Sept. 11, 2001, is that those who say they are worried about Islamic terrorism often fight to keep mosques out of their communities. …

In fact, what the United States needs to combat Muslim extremism is more high-stature Muslim leaders, not fewer.

What we have now is what one expert in American Islam described to me as “a leadership vacuum,” created by the low status and low salaries of imams in America. Extremist foreign leadership is attractive in part because local leadership is so sparse. If you want to integrate Muslims into American culture, these experts say, expand the pipeline of American imams by training them better and paying them more. …

When imams are paid, their salaries are unusually low. A position with a salary of $50,000 would be considered extremely desirable, according to Abdul Nasir Jangda, the former imam of a mosque near his native Dallas. …

Another key issue is that the vast majority of full-time imams were born and educated outside America, well-meaning but sometimes with a weak grasp on local culture. (Bagby said this is in large part because immigrants are likelier to accept low salaries.) …

Of course, only American Muslims can control how they pay and train their leaders.

The King of Saudi Arabia might have a different opinion on that.

One traditional solution European monarchs came up with to defang the subversive, destabilizing effects of religion was the Established Church. The Queen of England appoints the Archbishop of Canterbury, whose job includes making sure that no furious holyman on the taxpayer’s shilling stirs up religious passions disturbing to the Queen’s peace.

Unfortunately for the workings of America’s Zeroth Amendment — Immigration uber alles — the First Amendment begins with the words, “Congress shall make no law respecting an establishment of religion …”

But that’s just more proof that the First Amendment needs to be repealed for contradicting the Zeroth Amendment.