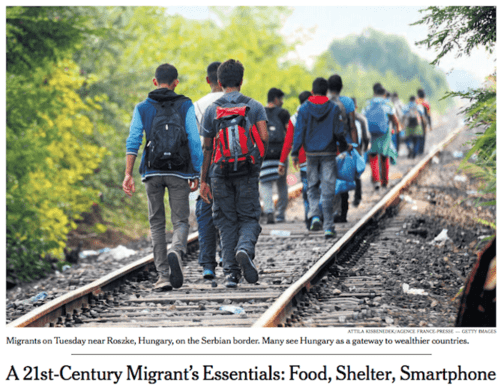 Got that smartphone battery loaded up? Time for Islam boyz to invade stupid infidels in Europe then.

I learned something by reading a Wednesday front-page New York Times story, that technology and smartphones fuel the current multitude of illegal immigration from Africa, Asia and the Middle East. The internet helps any Mohammed from Senegal to Kabul to make his way across thousands of miles of foreign territory to the welfare offices of his dreams in northern Europe.

The Camp of the Saints scenario of the 1970s was bad enough. Now the globalized information of the internet empowers diverse unfriendly hordes looking for a handout. Invaders can use their smartphones to plot their own route or hook up with a trafficker. They can keep up with border changes, police movements and available freebies — all the better to swarm European societies whose leaders are too clueless to recognize an invasion when it is happening to them.

BELGRADE, Serbia — The tens of thousands of migrants who have flooded into the Balkans in recent weeks need food, water and shelter, just like the millions displaced by war the world over. But there is also one other thing they swear they cannot live without: a smartphone charging station.

“Every time I go to a new country, I buy a SIM card and activate the Internet and download the map to locate myself,” Osama Aljasem, a 32-year-old music teacher from Deir al-Zour in Syria, explained as he sat on a broken park bench in Belgrade, staring at his smartphone and plotting his next move into northern Europe.

“I would never have been able to arrive at my destination without my smartphone,” he added. “I get stressed out when the battery even starts to get low.”

Technology has transformed this 21st-century version of a refugee crisis, not least by making it easier for millions more people to move. It has intensified the pressures on routes that prove successful — like this one through the Balkans, where the United Nations said Tuesday that about 3,000 people a day continued to cross the border from Greece into Macedonia.

Migrants depend on them to post real-time updates about routes, arrests, border guard movements and transport, as well as places to stay and prices, all the while keeping in touch with family and friends.

The first thing many do once they have successfully navigated the watery passage between Turkey and Greece is pull out a smartphone and send loved ones a message that they made it.

Much of the change is driven by the tens of thousands of middle-class Syrians who have been displaced by war. But the use of such tools is by no means limited to them, but rather used by migrants from Africa and the Middle East to Afghanistan and Pakistan.

Traffickers advertise their services on Facebook like any legitimate travel agency, with dynamic photographs of destination cities and generous offers.

On the Arabic-language Facebook group Trafficking to Europe, one trafficker offers a 50 percent discount for children under 5. The 1,700 euro price of the journey from Istanbul to Thessaloniki, Greece, about $1,900, includes travel by car to and from each side of the border with a two-hour walk across.

“We have cars going every day,” the trafficker boasts. One user asked whether there was a family discount for multiple passengers. And in case one doubts the offer’s veracity, the post has 39 “likes.”

The Trafficking to Europe group, with 6,057 members, is merely one small corner of an entire new world of social media available to Syrians and others making the perilous journey to Europe.

Syrians are helped along their journeys by Arabic-language Facebook groups like “Smuggling into the E.U.” with 23,953 members and “How to emigrate to Europe” with 39,304.

The discussions are both public and private — requiring an invitation from a group administrator. Migrants share photos and videos of their journeys taken on their smartphones.

They are used widely both by those traveling alone and with traffickers — in fact, the ease and autonomy the apps provide may now be cutting into the smuggling business.

“Right now the traffickers are losing business because people are going alone, thanks to Facebook,” said Mohamed Haj Ali, 38, who works with the Adventist Development and Relief Agency in Belgrade,Serbia’s capital — a major stopover for migrants.

Originally from Syria, Mr. Ali has lived in Belgrade for three years, helping migrants and listening to their stories. At first, he said, most migrants passing through Serbia had paid traffickers for most or all of their journey.

But as tens of thousands completed their journeys, they shared their experiences on social media — even the precise GPS coordinates of every stop along their routes, recorded automatically by some smartphones.

For those traveling today, the prices charged by traffickers have gone down by about half since the beginning of the conflict, Mr. Ali said.

The only part of the journey that most migrants still pay traffickers for, he said, is the crossing from Turkey to Greece. Many migrants now feel able to make the rest of the journey on their own with a GPS-equipped smartphone and without paying traffickers.

Mr. Ali noted the popularity of Facebook groups such as “Smuggle yourself to Europe without a trafficker.”

“Syrians are not idiots,” he said.

Mr. Aljasem, encountered in the park, said he kept in touch with his 21 siblings in five countries through WhatsApp, which requires only an Internet connection. Their private messaging group is called “Our Family.”

Once he left Syria, Mr. Aljasem said one of the first things he did was get a new smartphone because it was too dangerous to travel with one in Syria. Soldiers at government checkpoints, as well as at Islamic State checkpoints, commonly demand Facebook passwords, he said. They look at Facebook profiles to determine one’s allegiance in the war.

“If you didn’t give the soldiers your Facebook password they would beat you, destroy your phone or worse,” Mr. Aljasem said.

The technology is transforming the ways refugees and international aid agencies interact, even before the refugees enter Europe.

The Office of the United Nations High Commissioner for Refugees has distributed 33,000 SIM cards to Syrian refugees in Jordan and 85,704 solar lanterns that can also be used to charge cellphones.

“For the U.N.H.C.R., there is a shift in understanding of what assistance provision actually is,” said Christopher Earney from the refugee agency’s innovation office in Geneva.

Pawel Krzysiek, a spokesman for the International Committee of the Red Cross in Damascus, said smartphones enabled refugees to exchange information and interact with international agencies rather than just receive information passively.

“We are at the end of the social network age and are entering the social messaging age,” Mr. Krzysiek said.

When a water main broke in Aleppo in northern Syria in July, the committee helped organize a network of clean drinking-water points, and posted a map of the sites on Facebook. Mr. Krzysiek said that because of the water crisis, posts on the group’s Facebook Syria page reached 10 times as many people as regular posts about the group’s activities.

According to a Facebook analytics report, the committee’s map of safe water distribution sites in Aleppo was seen by 133,187 people, received 14,683 clicks and 4,859 likes, comments and shares.

Another example he gave was a popular Facebook page in Syria reporting real-time counts of mortar rounds falling on Damascus and city maps of their locations, allowing users to avoid certain areas.

Mohammed Salmoni, 21, from Kabul, Afghanistan, who had stopped to charge his phone at a newspaper kiosk in Belgrade, credited it with saving his life.

He used it to navigate a 40-hour walk across the Afghan province of Nimruz to the Iranian city of Zahedan. “It was very dangerous,” he said.

For others, cellphones are an archive of still deeper connections.

Shadad Alhassan, 39, said he “lost everything” when his home was bombed in Damascus, where he once worked installing electrical inverters in a skyscraper under construction.

“My wife died in the bombing,” he said. “Now I have nothing left besides my two sons,” he said, indicating Wassem, 10, and Nazih, 9, sitting with him on a sleeping bag on the dirt in the park.

His tablet smartphone held digital photographs, his only connection to the life he once lived.