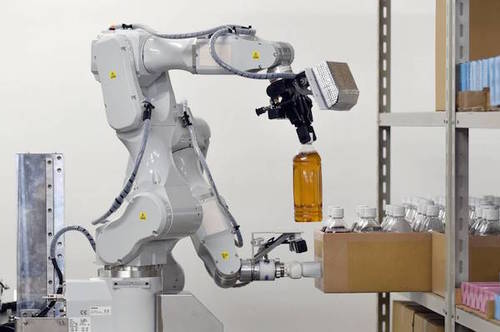 A new robot prototype from a Japanese company looks like another step toward a completely automated warehouse, where no human workers are necessary.

The machine has two arms and can pull items off a shelf and place them into a box.

This robot is an advance over the Kiva warehouse system used by Amazon to speed its order processing. The Kiva machines look like big shoeboxes with wheels that scoot under moveable shelves holding merchandise and transport them automatically to humans who pull the items and pack them for shipment.

Interestingly, my Amazon-shipped copy of Rise of the Robots arrived in a new kind of packaging. The book was enclosed in two pieces of light cardboard glued together around all sides, rather than in a box. It was clearly machine packaged and not touched by human hands.

In fact, Amazon has been a leader in making human workers obsolete, such as CEO Jeff Bezos’ plan to substitute drones for UPS trucks in merchandise delivery. In May, the company showed its interest in expanding its machine use when it sponsored a contest to find a robot that can identify, grasp and pack all sorts of objects.

So jobs are slipping away at an increasing rate as smart machines advance in intelligence and movement. It would be unwise for America to continue importing immigrant workers for a shrinking number of jobs. Oxford University researchers estimated in a 2013 paper (“The Future of Employment”) that 47 percent of US jobs could be done by automation and computers within 20 years. So the idea of a future labor shortage based on boomer retirement, a favorite argument of amnesty hucksters, is a myth. Politicians should instead be concerned about a future job shortage based on automation.

Given the rapid replacement of humans by robots, the correct number of immigrants now and going forward is ZERO.

In a warehouse in Noda city, east of Tokyo, a robot with wheels zips around to pick up boxes of goods and carries them to a shipping container. It’s Hitachi Ltd.’s vision for the future.

The Japanese maker of bullet trains and power stations on Tuesday unveiled a robot that can pick up products ranging from 500-milliliter (17-ounce) plastic bottles to shoe boxes weighing around 1 kilogram (2.2 pounds).

Such robots would have the potential to replace some workers as companies begin turning to them for repetitive tasks such as collecting items from shelves in Amazon.com Inc. warehouses. These new machines would also extend the use of robots from fixed positions on factory floors, a common sight at automakers from Toyota Motor Corp. to General Motors Co.

“We plan to start using them in our own group companies in two to three years and selling them in around five years,” Toshio Moriya, a general manager at Hitachi’s technology innovation center, said in Noda Tuesday. Companies could use tens of robots to more than 100 in a warehouse, he said.

Moriya declined to comment on pricing, except to say it would need to be competitive with current warehouse costs.

The Tokyo-based company is developing the robot’s software system, while Seiko Epson Corp. is making the hardware, according to Hitachi.

Picking up individual objects, while labor-intensive, is a task that remains better performed by humans. It’s a difficult job for robots, which use sensors to identify items that can be confused by packaging. Last year, Amazon hired 80,000 temporary workers for its more than 50 warehouses during the holiday shopping season to do similar tasks.

The number of industrial robots in use has risen to 1.6 million as of 2013 since General Motors first put one on an assembly line in 1961, according to the International Federation of Robotics.