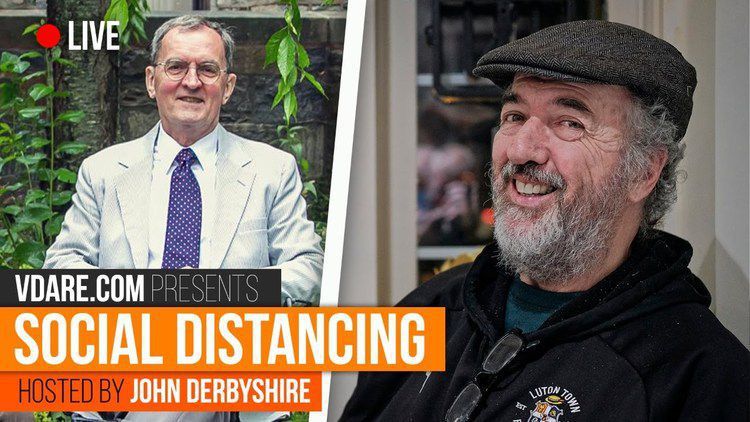 Join us HERE (from a safe digital distance) for our happy hour with John Derbyshire and Colin Flaherty this Wednesday at 3 p.m. EST! We’ll be streaming LIVE on our YouTube channel!

Be sure to click here to subscribe to our channel and reserve your seat for the premiere!

Colin Flaherty is an award-winning writer whose work has been published in more than 1000 places around the globe, including the New York Times, Los Angeles Times, Boston Globe, Miami Herald, Washington Post, Bloomberg Business Week, Time magazine, and others.

He is the author of the Amazon #1 Best Seller: White Girl Bleed a Lot: The Return of Racial Violence and How the Media Ignore It  as well as Don't Make the Black Kids Angry: The Hoax of Black Victimization and Those Who Enable It. Unfortunately, the latter book was banned by Amazon by Tech Totalitarians, and five separate channels on YouTube Mr. Flaherty created were also deleted. It could be argued Mr. Flaherty was one of the first targets of digital deletion by our tech totalitarians.

As Flaherty wrote at American Thinker at the time of his final ban:

“As with all my videos, there is no racism, no rancor, no apologies.  Neither is there obscenity or vulgarity of any kind.  No matter: that video came down.  And, once again, YouTube dropped me like a pile of hot rocks.

Over the last few years, my videos have become "a thing," garnering more than 100 million views, mostly from people who are as skeptical as you and me.  No one has time to watch videos that are not true.

And if they are not true, it should be the easiest thing in the world to show.  Instead, the dominant reaction from the trolls is 1) that is not happening; 2) white people do it, too; 3) white people deserve it; and 4) let's hammer YouTube until Colin is removed.”

Thomas Sowell praised Flaherty, as he said, "Reading Colin Flaherty's book made painfully clear to me that the magnitude of this problem is greater than I had discovered from my own research. He documents both the race riots and the media and political evasions in dozens of cities."

Watch our past episodes of “Social Distancing with Peter Brimelow”: