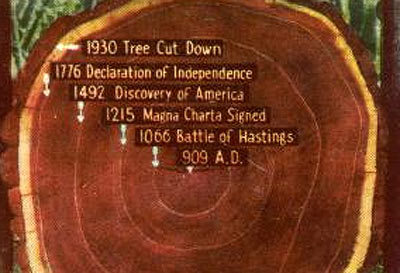 Takuan Seiyo is difficult to edit because he hates it (cf. Steve Sailer) and because because his discursive style bothers me on behalf of VDARE.COM's busy readers. Nevertheless, our Letters Editor, Joe Guzzardi, tells me that his articles get an extraordinary amount of email.

Seiyo's (Tekuan's?) Brussels Journal piece entitled (to my eye) elliptically From Meccania to Atlantis - Part 7: The True Horror in Hitchcock Films, is, for all its discursiveness, brilliant, and I urge VDARE.COM readers to study it and click on its amazing links.

Right now, I offer only this excerpt:

Here are James Stuart and Kim Novak in Vertigo, taking a walk in the fabled Muir Woods, a few miles north of San Francisco. T

This footage has been dubbed into Italian, but it doesn’t matter. The main actors here are the magnificent redwoods.

On their walk, Scottie and Madeleine/Judy, stop by a cross section of a giant redwood. There are markers next to the tree’s growth rings, to show how old it was when cut down. The tree was over-1,000 years old. To visualize that, there is an arrow close to the center, marked 1066 – Battle of Hastings. Other arrows, in an outward progression, mark 1215 – Magna Carta; 1492 – Discovery of America; 1776 – Declaration of Independence.

A pivotal exchange between the two characters takes place, prompted by the 1000-year calendar that the tree expresses. But what's important for our purpose here is that this is a real redwood section, and those arrows and dates are real, and they were there on my hundreds of walks in that forest.

One day, Body Snatcher State that administers the park — for it is a U.S. National Monument — rearranged the arrows. The redwood calendar now looks like this:

The Battle of Hastings is gone. Instead, marking the pivotal event of the 11th century, of the greatest significance to Americans, is the building of cliff dwellings by murderous, self-extinguishing cannibals in a rock in Mesa Verde, Colorado.

The Signing of the Magna Carta as the late Middle Ages event of most significance to Americans is gone too. Instead, there is a new arrow that wasn’t there when Jimmy Stewart and Kim Novak visited. It’s marked 1325 – Aztecs Begin Construction of Tenochtitlan, Mexico. Thus doth Body Snatcher State announce to its subjects, children of the people who walked through the frames of Hitch’s movies, that their country has been snatched away from them.

Now, the Battle of Hastings is of no emotional significance to me. I don’t have a drop of Norman or Anglo-Saxon blood in me, and until I was 20 I didn’t even speak English. But I emigrated to the United States because it had been founded by descendants of those Normans and Anglo-Saxons, and its founding institutions embodied the virtues of those people and of their singular document, the Magna Carta.

So that we don’t get our arrows confused, the way the U.S. Federal Government has, let us recall why the Aztecs began their construction of Tenochtitlan in 1325. Two years earlier, in 1323, these refugees, who had been welcomed and allowed to settle among the people of Culhuacan, and to intermarry and mingle with their hosts, had done something to celebrate their strength in diversity.

The Aztecs, or Mexica as they called themselves, asked the king of Culhuacan, Achicometl, for permission to make his daughter into their goddess. Their wish was granted. What the Culhuacan king didn’t know was the details of this “canonization.”

He would learn soon enough. At a feast celebrating the new goddess of the Aztecs, their priest appeared, wearing the flayed skin of Achicometl’s daughter. That is why the Aztecs had to flee the wrath of their hosts to an island on Lake Texcoco, where they began to build their city Tenochtitlan in 1325.

Now if this is what the United States Government wishes to celebrate, instead of one of the founding documents of Western Civilization and of its own Constitution, things have gone seriously awry. But that’s because the demographics have gone seriously awry. The people milling about in Hitchcock’s train stations and train cars, streets and restaurants, office and hotel lobbies, were replaced, when not by the “GLBTA community,” by Aztecs imported by bleeding-heart Body Snatchers and by fathomlessly greedy “capitalists.”