Ta-Nehisi Has a (Sort of) New Book

From the New York Times book review of Teh-Genius Coates’ new/old book We Were Eight Years in Power:

Through the Lens of the Obama Years, Ta-Nehisi Coates Reckons With Race, Identity and Trump 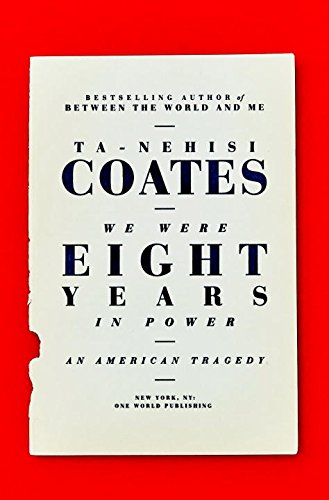 The simplest way to describe “We Were Eight Years in Power” is as a selection of Coates’s most influential pieces from The Atlantic, organized chronologically. The book is actually far more than that, but for now let’s stick with those pieces, which have established Coates as the pre-eminent black public intellectual of his generation. …

But taking in Coates’s essays from start to finish is still a bracing thing, like drinking a triple scotch, neat.

Perhaps an even more compelling reason to read “We Were Eight Years in Power” is for the new material Coates has written. He introduces each magazine story with an essay that serves not just as connective tissue, binding one work to the next, but as meta-commentary, reminiscent of Mary McCarthy’s italicized re-reflections in “Memories of a Catholic Girlhood.” He calls each one “a kind of extended blog post,” offering a glimpse into what he was thinking and feeling when he wrote the article that follows it.

The most interesting thing about Coates, of course, is that he’s not super bright. He’s not stupid, but he’s distinctly below what you would previously expect for somebody of his eminence.

What does it say about America in 2017 that you are supposed to praise the brilliance of Ta-Nehisi Coates?