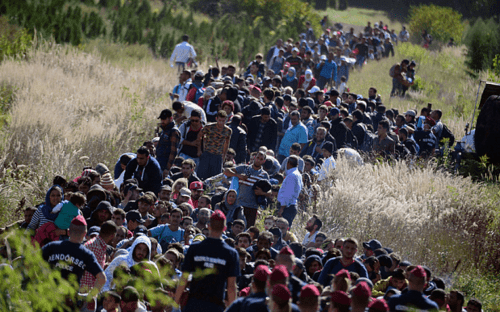 [H/T Photo Refugee Resettlement Watch: "Look closely! What do you see? I see an army of invading young men, only a few women among them. Migrants walk through the countryside after crossing the Hungarian-Croatian border near the Hungarian village of Zakany" AFP PHOTO / ATTILA KISBENEDEKATTILA KISBENEDEK/AFP/Getty Images ]

Yesterday the Washington Post had an extremely important story They may sound Indian, but if anyone asks, they're from Syria by William Booth September 24th 2014. Quite reasonably it appears to be behind their new paywall. [Here's a toned down rewrite]

Moving among the tens of thousands of Syrian war refugees passing through the train stations of Europe are many who are neither Syrian nor refugees, but hoping to blend into the mass migration and find a back door to the West…

"What we see here has nothing to do with seeking refuge and safety," Austrian Interior Minister Johanna Mikl-Leitner said Monday. "It is nothing but opportunism."

It is common knowledge on the migratory route that some who are not from Syria shred their real passports in Turkey and simply fake it.

The anecdotal support is powerful:

A couple of reporters, one a native Arabic speaker, who wandered through train stations in Vienna found plenty of newcomers whose accents did not match their stories and whose stories did not make sense…

An Austrian security official, who spoke on the condition of anonymity, said there are also thriving black markets for Syrian passports in Croatia, Serbia, Hungary and Austria.

There are enough pretenders that true Syrians complain about ersatz Syrians…

"Look at these people, what are they doing here? We are the ones who are fleeing from war and slaughter, and now these men are taking away our space," said Mustafa, 62, from Syria. He had stopped to help a woman who had fainted, letting a group of Afghans use the opportunity to cut in line.

"I don't understand - we thought the Europeans invited Syrians like us to come," said one of Mustafa's companions.

Reuters carries a quasi-confirmation of this phenomenon

Germany says about 30 percent of migrants claiming to be Syrian are not Marko Djurica September 25, 2015

"30 percent of those asylum seekers who claim to be Syrian are not Syrians according to this estimate," Tobias Plate said at a government news conference, adding that there were, however, no precise statistics on this.

Bearing in mind how foolish the German authorities look this could well be a huge underestimate.

For America the conclusion is obvious: Donald Trump is right. The correct “refugee” quota is Zero.