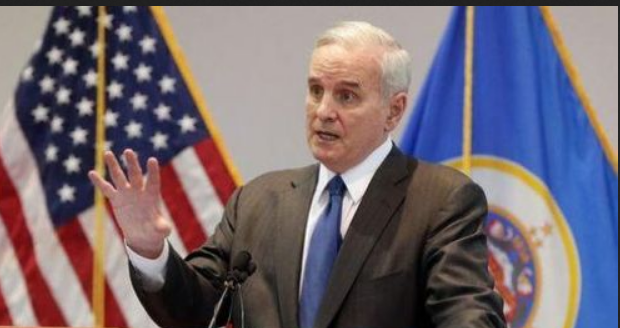 Minnesota Governor: "Our Economy Cannot Expand Based on White, B+, Minnesota-born Citizens."

From the St. Cloud (Minnesota) Times:

Dayton blunt in MN forum: Anyone who can’t accept immigrants ‘should find another state’

Who is Mark Dayton? From Wikipedia:

Mark Brandt Dayton (born January 26, 1947) is an American politician and the current and 40th Governor of Minnesota, serving since 2011.[1] He was previously a United States Senator for Minnesota from 2001 to 2007, and the Minnesota State Auditor from 1991 to 1995. He is a member of the Minnesota Democratic–Farmer–Labor Party (DFL), which affiliates with the national Democratic Party.

A native of Minnesota, Dayton is the great-grandson of businessman George Dayton, the founder of Dayton’s, a department store that later became the Target Corporation. He embarked on a career in teaching and social work in New York City and Boston after graduating from Yale University in 1969.[2] During the 1970s, he served as a legislative aide to U.S. Senator Walter Mondale and Minnesota Governor Rudy Perpich. In 1978, Dayton was appointed the Minnesota Economic Development Commissioner and married Alida Rockefeller Messinger, a member of the Rockefeller family.[2]

Back to the St. Cloud Times:

From the start of the event, Dayton bluntly stated his opinions on the racial tension in St. Cloud and across the state in regards to immigration.

Dayton said he was aware of some of the racial issues happening in the St. Cloud area and urged participants to take a stand against what he described as “unacceptable, un-Minnesotan, illegal and immoral” behavior.

“If you are that intolerant, if you are that much of a racist or a bigot, then find another state. Find a state where the minority population is 1 percent or whatever.

Gov. Dayton did not provide a list of such states. Even Bernie Sanders’ Vermont is well above that level.

Anderson suspects many of the issues of racial intolerance in St. Cloud have stemmed from those outside the community.

“A lot of the tensions that we have in the community are stirred up by people who aren’t stakeholders. They’re not from here. They don’t care what happens here. And they are usually incorrect,” Anderson said.

But those comments did not stop several in the audience from questioning how the governor, Knoblach and Kleis are spending tax dollars on new immigrants, particularly those of East African descent.

Dayton said many organizations are providing assistance to those who are arriving in Minnesota. But he said the key reason many immigrants choose to come to Minnesota is because of the jobs Minnesota provides.

And don’t get the Governor of Minnesota started on white, C+, Minnesota-born citizens. Why are they even allowed to exist? (I mean other than to to consume a lot of crap sold by the Dayton-Rockefeller family businesses, Target and ExxonMobil?)

But seriously, how can Target sell more toilet paper without Minnesota taxpayers paying to import the surplus population of the Mad Max zones of the Horn of Africa? Think about it! Haven’t you studied demographics!